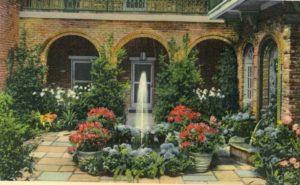 By Tom McGehee
Museum Director of the Bellingrath Home

Picture postcards are a 20th-century creation. In 1898, the U.S. Congress passed the Private Mailing Card Act, which allowed private firms, rather than just the Postal Service, to print postcards. Soon after Bellingrath Gardens opened in 1932, postcards made from black and white images were offered for sale at the front gate. 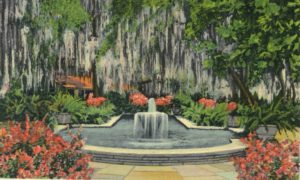 These images were soon joined with colorful “linen cards,” so called for the high rag content, making them look like cloth or linen. Walter Bellingrath Edgar, a great nephew of Bessie Bellingrath and a trustee of the Bellingrath Morse Foundation, recently donated a letter regarding these later, hand-tinted cards. It was written by his uncle, Will Dorgan, to Mrs. Charles Keating of Ohio, who had requested a set of 12 cards depicting the Gardens. 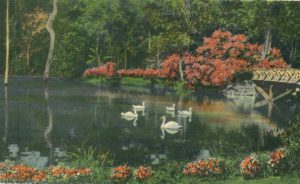 In the letter, dated May 1, 1939, Mr. Dorgan explained that “These cards are made in Switzerland and arrived in New York on March 28th and should have reached us the following week. For some unexplained reason they have been held up in the customs house in New York for inspection and it has been difficult for us to find out just why this unusual delay.”

Before the letter had been mailed, Mr. Dorgan added this P.S.:  “Since writing the above the cards have arrived and are inclosed. (sic)” 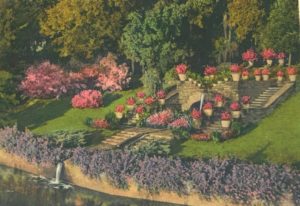 On the outside of the envelope containing the postcards is a poem written by George B. Rogers, the architect who designed Bellingrath Gardens and Home:

“And thro’ this forest the sunlight stealing,
Kissing the moss and to sight revealing
Wondrous visions of blooming flowers.
Dreams in color, midst leafy bowers.
Camellias, azaleas, and others galore
Compete in harmony. Could you ask more?”

In just four months after that letter was mailed, war would be declared in Europe, and the importation of European goods as well as future orders of those postcards would come to an abrupt halt.