Bellingrath Gardens and Home is known for its massive plantings of evergreen Southern Indica azaleas, but Gulf Coast gardeners also enjoy the blooms of native deciduous azaleas. Within the U.S., there are at least 17 species of native azaleas, five of which are native to Alabama. One species is named Alabama Azalea, Rhododendron alabamense; it has beautiful, fragrant white flowers.

Native azaleas, also known as honeysuckle azaleas, can range in height from knee high to up to 15 feet at maturity. They tend to bloom in late spring along the Gulf Coast. 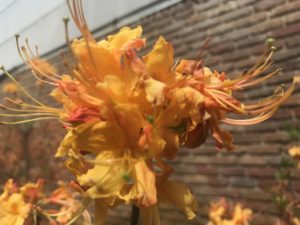 I have always been fascinated by native plants, particularly those with showy flowers. My love of native azaleas comes from my early discoveries as a young boy, when I would find these plants in the woods near my home in Dothan, Ala. As a young professor at the University of Florida, I was invited to interview at Callaway Gardens for the position of Director of Horticulture. As part of the interview, I had lunch with the regal Mrs. Cason Callaway, an event that made me feel as though I were dining with the Queen Mother. “Miss Virginia” asked me only one question: “Dr. Barrick, which do you prefer: native azaleas, or what I refer to as ‘store bought’ azaleas?” Having just driven around the primary artery of Callaway Gardens and seen thousands of native azaleas in full bloom, I had the right response: “Yes, ma’am, I prefer natives.” 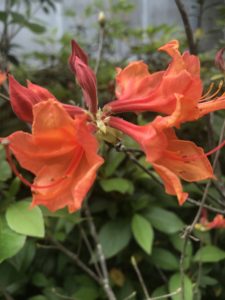 In my mind, the Godfather of native azaleas is Tom Dodd of Semmes, Ala. I can still remember visits to his nursery when I was a horticulture student at Auburn University. He showed us his native azaleas with great pride. Shortly after my arrival at Bellingrath, I spent one spring afternoon with his son and daughter-in-law, Tom Dodd III and Thayer Dodd, viewing Mr. Dodd’s natives and hybrid crosses. On that afternoon, I was introduced to the Confederate series of natives developed in their nursery. The parents of these new azaleas are the native Florida Azalea, Rhododendron astrinum, and an Exbury Azalea variety named ‘Hotspur.’ The Exbury Hybrid Azaleas were developed in England in the mid-1900s. This hybrid group of azaleas is noted for large trusses of flowers, but unfortunately for Southern gardeners, they are not adapted to our summer heat. From the seeds of these original crosses, Mr. Dodd selected and named several new varieties.

In a simliar breeding program, the late Dr. Gene Aromi, a retired education professor from the University of South Alabama, began a hybridizing program for both evergreen and deciduous azaleas. The goal of his evergreen efforts was to create azaleas with large flowers, early blooms, improved hardiness, and a variety of flower forms and colors. Similarly, the goal of his deciduous breeding program was to create plants with heat tolerance and larger, fragrant flowers. His strategy was much like Mr. Dodd’s, as he crossed Southern natives with Exbury hybrids. Dr. Aromi named more than 100 new varieties, of which eight have been registered, including ‘Aromi Sunny-side up,’ ‘Aromi Sunrise,’ and ‘Pink Carousel.’ Maartin van der Giessen of van der Giessen Nursery in Semmes has acquired all of Dr. Aromi’s hybrids and is working on propagation techniques to make these varieties commercially available.

I hope that I have enticed you to consider using native azaleas in your home garden. They are ideal as understory plants and for use in partially shaded areas. They prefer loose, well-drained and well aerated soil with a pH level of 5.5, so if your soil is extremely acidic or alkaline, you may need to adjust the pH balance by adding dolomitic limestone. It’s best to plant them in late fall.