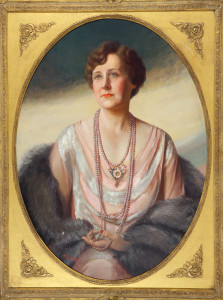 Over the years, it often seems as if far more emphasis has been placed on the life of Walter Bellingrath than that of his wife. The definitive history book for sale in the Bellingrath Gift Shop is called “Mr. Bell,” when a more appropriate title may indeed have been “Mr. and Mrs. Bell,” since the story of Bellingrath Gardens and Home is intertwined with both of their personalities.

Walter Bellingrath set up the Bellingrath Morse Foundation, charging it to maintain his home and its gardens as “a fitting and permanent memorial to my wife,” not himself.  Part of the issue may be that he did outlive his wife by a dozen years and during those years he was repeatedly interviewed by news reporters – especially following the announcement of his having created a foundation to keep the Gardens and his home open to the public for future generations.

Bessie Morse Bellingrath was born on May 20, 1878, in Mobile, Ala. She met Walter Bellingrath at some point in 1904 or 1905, when he hired her as his stenographer at his Coca-Cola Bottling Co. in downtown Mobile. The couple were married on November 14, 1906. After 37 years of marriage, Bessie died suddenly on February 15, 1943, at the age of 64, during a vacation to a resort in Hot Springs, Arkansas.

Although relatively little has been written about Miss Bessie, two individuals who knew her well offered some insight into her personality. These stories reflect a warm and very generous person with a good sense of humor.

C. Ernest Edgar Jr. was Bessie Morse Bellingrath’s oldest nephew, having been born in 1906.  That was the same year she had married Walter Bellingrath. Both the Edgars and the Bellingraths lived on Ann Street, so Ernest grew up underfoot.

After returning to Mobile from Davidson College in North Carolina, Ernest worked for his uncle at the Coca-Cola bottling plant. In 1934, Ernest drove the Bellingraths to the west coast and back with his wife Amelia by his side. It wasn’t long after their return that construction began on the Bellingrath Home, making it necessary to demolish the building which had housed the kitchen and dining room.

One early morning, Ernest said, his aunt called him at work and asked him to come by the Ann Street house. She and architect George B. Rogers needed to go down to the building site and they wanted him to drive. A picnic lunch was being prepared.

Unbeknownst to his aunt, Ernest had a very late night on duty with the National Guard and was exhausted. He called up a couple of friends to ride in the front seat with him and help him stay awake, but none could leave their jobs for the excursion.

The picnic lunch was far more than sandwiches. Containers of fried chicken, gravy, vegetables and all the trimmings were placed on the floorboards of the limousine as Ernest watched. Finally, his aunt and the architect got in the back seat armed with piles of magazine clippings and books with ideas for the new house, and off they went.

As the limousine sped southwards, its driver repeatedly nodded off, and then awoke with a start.  Peering into the rear view mirror, he realized his passengers were too busy with their house plans to notice. When they were less than a mile from the gates, Ernest missed the turn into the property and sailed past, sound asleep at the wheel. The car veered into a ditch and fell on its side, cracking an axle.

While no one was injured, the lunch had gone airborne, coating Mrs. Bellingrath and her architect with a warm sampling of the planned meal. As the three stood beside the wreck, who drove up but Walter Bellingrath, who quickly sized up the situation.

“Dammit, Ernest, what have you done now??” Before he could even think what to answer, Bessie Morse Bellingrath spoke up. “Bell, it wasn’t his fault. A covey of quail ran in front of the car and Ernest was trying to avoid them.”

The next day Walter Bellingrath confronted Ernest, who confessed. His uncle’s response: “I knew it.  I knew we didn’t have any quail down there.” And not another word was spoken about the incident.

Once the Bellingrath Home was completed, Ernest, Amelia and their young son, Ernest III, were frequent weekend houseguests. On a memorable Friday afternoon Ernest recalled walking in the front door and seeing his son running around the dining room table making airplane noises as he held a sterling silver peacock above his head. After looking around and seeing no sign of his aunt, Ernest, horrified, stepped into the door way and whispered, “Ernest, put that down carefully. Now, you know not to touch Aunt Bessie’s pretty things!” As he stepped into the room, he realized that his aunt was sitting there watching her great nephew.

“That’s all right, Ernest,” she said. “I told him he could play with it. If he breaks it, he breaks it.  Don’t worry about it.” And little Ernest revved up his engine and continued his play.

One of the butlers, the late Edward Carl, recounted going to work for the Bellingraths around 1936 after graduating high school in Mobile. His uncle, Alfred Watson, was the senior butler.  Edward said that soon after taking the job, Mrs. Bellingrath asked his assistance in cleaning out a chest of drawers. After wiping out the first drawer, Bessie Bellingrath placed everything back in place, and he put the drawer back in the chest.

He pointed to the next drawer, but Mrs. Bellingrath said, “No, that’s enough for today. I’m getting a little tired. But wait a minute.” And with that, she handed him a folded $20 bill (more than a week’s wages in Depression Era Mobile), with the instruction of “Now, not a word!” That was one of many such gifts she freely handed out, and always with that same admonition.

A while later, she asked him how he was getting to work. Edward explained that he caught a ride with a co-worker who lived nearby. “Now, Edward, you need to be independent and have your own car,” she told him. “Well,” he explained, “I have been saving up and found one I like.” Mrs. Bellingrath asked about the car and the price and said, “I’ll tell you what. Tomorrow when you run my errands to town, stop by the house on Ann Street and Maria will have an envelope for you.”

To his considerable surprise, that envelope contained the full purchase price of the car. Edward later got the vehicle and drove it to the Gardens to show Mrs. Bellingrath. He told her “Now, Miss Bessie, I had saved some money for the car, so I will give that to you and then we can decide on how much to deduct from my pay each week.”

He recalled that without hesitating, she said, “Now Edward, that was not a loan. But … not a word!”

Edward also had a story about a very young Ernest Edgar III who called him “Bub,” since he could not pronounce “Edward.” The little boy was just beginning to talk, and stood among the three butlers in the kitchen, who found to their delight, that he would repeat almost anything said to him – and the words and phrases got saltier by the minute.

As Ernest III tells it, a day or more later he was in his high chair at the lunch table surrounded by adults when there was a lull in the conversation. In a crisp voice he said, “Would someone pass the damn butter?” His poor mother was aghast. “Where on earth did you learn that??” His grinning response: “Bub!”

Mr. Bellingrath went into the kitchen and told the men that the boy would learn that sort of thing in his own time and to cut it out. And what was his wife’s response? According to Ernest Edgar Jr., she was having a good laugh.

Edward entered the service during World War II and was overseas when Mrs. Bellingrath passed away in 1943. He recounted how upset he was that no one wrote him the news and that he only found out about it upon his return. Walter Bellingrath begged him to come back to work for him, and in 1955, it was Edward Carl who sat with him daily at the hospital. He had just returned home at about 9:00 p.m. one evening when he got the call that Mr. Bellingrath had died.

We are indeed fortunate to have these memories from two gentlemen who were very close to Mrs. Bellingrath. While we know of the generous prices she paid for antiques – often far more than their value – the perspective of her life from a family member and a trusted employee reveal a very special lady. It is an honor for every employee at Bellingrath Gardens and Home to work towards maintaining her home and beloved gardens as a fitting and permanent memorial to her.