After Walter Bellingrath’s death in 1955, his home was opened for public tours, while the adjoining Lodge was converted into a gift shop.  The Gardens had previously sold souvenir items at the entry gate. From what images remain, those items appear to have been postcards.

When the former living room of the Lodge became available for Bellingrath’s first official Gift Shop, display cabinets were installed, and in the image above, many once popular items are visible.  The majority of these have vanished from store shelves.

Souvenir China: The plates on view help date this image.  In March 1957, Bellingrath Gardens and Home placed the first of numerous orders with Adams Potteries in Staffordshire, England, for various sizes of plates, mugs and pitchers – none of which are on display in this view of the Gift Shop. 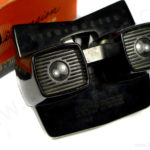 Remember Viewmasters? Sitting on the countertop is a model of the popular Viewmaster introduced in 1955.  The first Viewmaster arrived in time for the opening of the New York World’s Fair in 1939 but this was a new version.  Visitors to Bellingrath Gardens could enjoy “3-D” color images of the Gardens.  Viewmasters would continue to be popular well into the 1970s, but the last was produced in 2008. 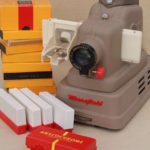 And 35 MM Slides? Beginning in 1935, Americans could purchase film to produce 35 mm color slides which could be shown at home on projectors.  If a guest wanted both photographs and slide images of their visit to Bellingrath, he would have had to have carried two cameras.  The Gift Shop has on display sheets of color slides so that the visitor need only bring in one camera for photographs.  Of course, racks of postcards at five and ten cents are also on display.

Boxes and Boxes of Film: Since the earliest days of Bellingrath Gardens, visitors have arrived carrying a camera.  In case one of those guests ran out of film or decided to switch to another type, the gift shop was obviously ready and well stocked. And if they somehow forgot their camera?  No worries. Look at the selection of cameras for sale. Digital photography  has made these cameras, the sale of film and of course slides completely obsolete.

The Lodge housed the Gift Shop until the early 1960s, when the new entrance was constructed.  That building also housed the café and gift shop. Both have been enlarged over the years and the new entrance building was constructed in the early 1980s. The site of the Lodge now holds the South Terrace fronting the Bellingrath Home, and sadly, nothing of the Lodge remains.