American prosperity during the 1920s brought a building boom, and all those new houses boasted every new amenity, especially in the bathroom.  As the decade began, these rooms sported gleaming white tiled walls, floors and fixtures.  As the decade ended, designers had tired of that clinical look and introduced a new idea: color.  Hollywood movie stars lounging in huge tubs of bubbles in their palatial bathrooms only added to their appeal.

The 1929 Standard Plumbing Company catalog displayed a wide array of newly introduced colors:  Claire de Lune Blue,  Ming Green, T’Ang Red, Orchid of Vincennes (lavender) and Rose du Barry.  Many of these colors were used in the building of the Bellingrath Home in 1935 and delight many a surprised visitor.

The Bellingrath Home of 1935

The idea of colorful bathrooms in 1935 Mobile was certainly thought to be cutting edge, and within a home as traditional as the Bellingraths’ must have startled many a first-time guest. A first-floor powder room is tiled in yellow and trimmed with blue. Standard termed those colors Ivoire de Medici and Claire de Lune Blue. 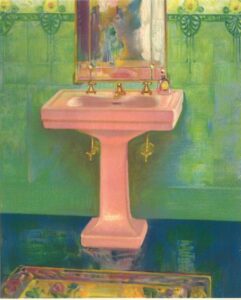 According to tradition, these colorful bathrooms were the idea of Walter Bellingrath, who noticed them on display on his visit to the Chicago World ’s Fair, which was held in 1933-34 and known as “The Century of Progress.” Americans flocked in record numbers to forget their Depression-era woes and see the latest technological wonders.

The 1929 Standard catalog also includes a photo and description of the company’s electric dishwasher, which is likely the same model purchased by the Bellingraths in 1941. As the description explains: “The ‘Standard’ Electric Dishwasher is different from all other domestic Dishwashers. It adopts the principle, as in the hotel dishwasher, of having dishes move through a forceful spray of hot cleansing water containing Dishwashing Power. … This certainty of complete cleansing cannot be assured with the revolving paddle method of splashing water over stationary dishes.”

The idea of colorful bathroom fixtures became even more popular after World War II, and new colors arrived.  By the early 1960s, much darker shades were introduced and would continue to be popular well into the 1970s. Today the idea of all-white bathrooms seems to have come back into popularity, but given time, the pendulum is sure to swing back once again.