Early in his career, he was awarded the Martin McLaren Horticultural Scholarship from the Garden Club of America, which he used to study gardens, garden history, plant diversity, plant conservation, and horticulture in the United Kingdom. He has undertaken plant expeditionary work in China, the Republic of Georgia, Mexico, and much of the U.S. He has visited more than 450 gardens during his career.

Dr. Lasseigne has been invited to speak to nursery and public garden professionals in the U.S., the Japanese Nursery Association in Saitama, Japan, and the Seoul Botanic Park in South Korea. He served as the chair of the Plant Collections Professional Section for the American Public Gardens Association from 2008 to 2011, is active in numerous plant societies, and helped organize professional meetings for the Maple Society and the American Public Gardens Association.

Before coming to Bellingrath Gardens and Home, Dr. Lasseigne was President and CEO of Tulsa Botanic Garden in Osage County, Oklahoma, a position he held from 2011 to 2020. Under his leadership, Tulsa Botanic Garden was developed into a nationally recognized botanical garden. In addition, Dr. Lasseigne was the founding Executive Director of the Paul J. Ciener Botanical Garden in Kernersville, N.C., and Assistant Director of the JC Raulston Arboretum at North Carolina State University in Raleigh, N.C.

Dr. Lasseigne is a native of Thibodaux, La., and is married to Heather Toedt. He was selected to replace Dr. William E. Barrick after a national search. Dr. Barrick retired on July 19, 2019, after 20 years at Bellingrath, and was named Executive Director Emeritus.

Tom McGehee has served as the Museum Director for Bellingrath Gardens and Home since January 1994. In that capacity, he oversees the 15-room Bellingrath Home and its collection of decorative arts and antiques as well as its archives. He also maintains the Delchamps Collection of Boehm Porcelain.

McGehee currently serves as past president of the Rotary Club of Mobile and is a member of the Board of Directors of the Friends of Magnolia Cemetery, the Friends of the Alabama Governor’s Mansion, and the Friends of the History Museum of Mobile. In 2012, he was named Rotarian of the Year. He served for 21 years as chairman of the Tree Commission for the City of Mobile and recently ended his third term as secretary of the Victorian Society in America, headquartered in Philadelphia. He is a longtime member of Government Street Presbyterian Church, where he recently completed a term as Clerk of Session.

Since 1997, McGehee has been a regular lecturer for the Roads Scholar program (formerly Elder Hostel) hosted by the University of South Alabama, and has conducted walking tours of Mobile’s historic districts and Magnolia Cemetery.

His “Ask McGehee” column has appeared monthly in Mobile Bay Magazine for more than a decade and it has regularly won the annual Readers’ Choice Award. He also serves as editor for the Magnolia Messenger, the newsletter for the Friends of Magnolia Cemetery, which is published three times a year. Since 2016, he has appeared regularly in the “Lost Mobile” series on “Gulf Coast Today” on WPMI-TV.

McGehee is a native of Bronxville, N.Y., and a graduate of the Bronxville School and the University of Georgia, where he earned a BA in journalism with minors in business and history. He is married to the former Lucile Rutherford Smith of Monroeville. His daughter, Megan, currently lives in Athens, Greece.

Chuck Owens is the Horticultural and Operations Director for Bellingrath Gardens and Home, where he has been employed since 1998. Before coming to Bellingrath Gardens, he worked for many years in the landscape installation and maintenance industry and in his family’s recreation/amusement business.

Mr. Owens is a native of Decatur, Ala., and a graduate of Auburn University in Landscape and Ornamental Horticulture. He is a member of the National Chrysanthemum Society and the Alabama Fruit and Vegetable Association. He and his wife, Amy, are members of Oyster Bay Baptist Church. They live on a small farm with their three daughters in the Rosinton community in Baldwin County, Ala., where they grow pecans, satsumas and other citrus. 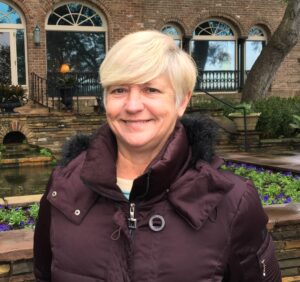 Ms. Smith is a native of Douglasville, Ga., and attended college at Floyd College in Rome, Ga. She and her husband, Adam Moss, a retired lieutenant colonel with the U.S. Marines, live on Dog River and enjoy boating and participating in river cleanup events. 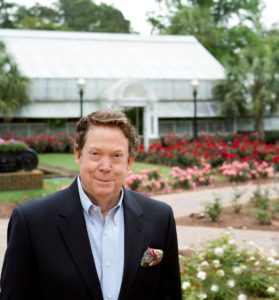 William E. Barrick received BS and MS degrees from Auburn University and a PhD in Landscape Horticulture from Michigan State University. After graduation, he served as an Assistant Professor in Ornamental Horticulture at the University of Florida. He was Executive Vice President and Director of Gardens at Callaway Gardens in Pine Mountain, Ga., for almost twenty years before becoming Executive Director of Bellingrath Gardens and Home in November 1999.

Dr. Barrick has served on the board of Mobile Bay Convention and Visitors Bureau since 2000 and currently serves as Vice Chairman of the Board. Additionally, he serves on the board of the South Mobile County Tourism Authority as a founding member and Chairman of this organization. Most recently, he was appointed by Governor Robert Bentley to the Alabama Coastal Advisory Committee.

Dr. Barrick retired in July 2019. He and his wife, Jessica, are members of Dauphin Way United Methodist Church and are involved in several cultural organizations in the community.