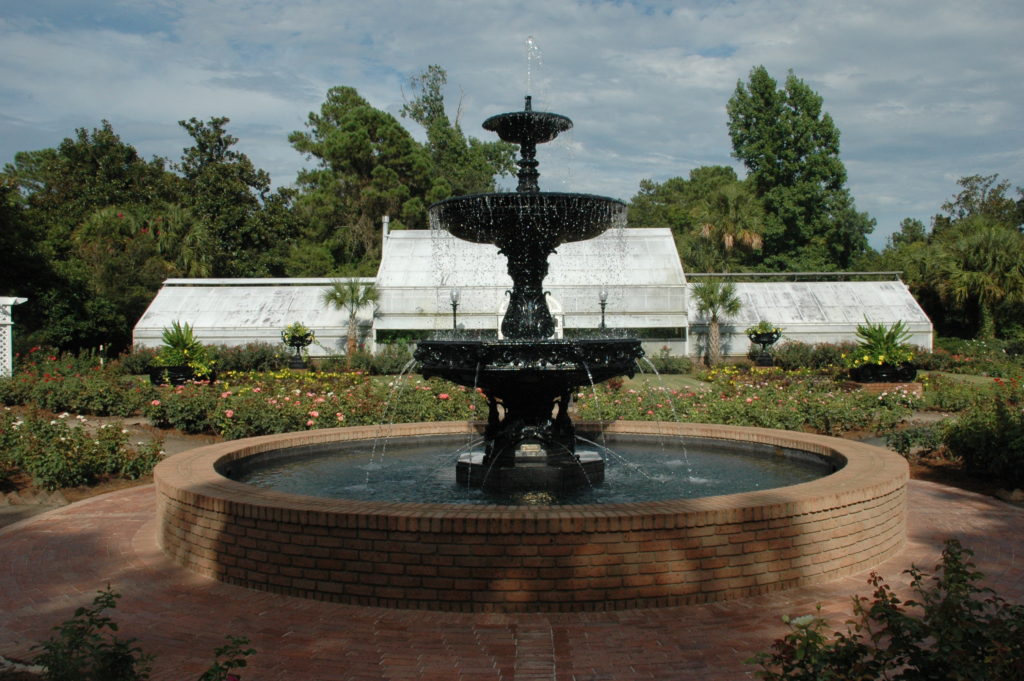 One of the most wonderful water features in the Gardens is the majestic, three-tiered cast iron fountain in the center of the Rose Garden. Many of our guests may be surprised to learn that it is a fairly recent addition to the Gardens, because it looks as though it has always been there.

In March of 2005, I received a call from Mickey Tuite, Operations Director for Bel Air Mall, offering to donate the fountain to the Gardens. The fountain had been located in the entrance to the Mall, but was put in storage after their extensive remodeling project. Upon seeing the fountain, I was thrilled and was confident we could find a home for it. After looking at a number of options, we decided that the center of the Rose Garden was the perfect place.

Because of the Rose Garden’s history — it dates to 1936 and was one of George B. Rogers’ original designs — I sought the advice of historian John Sledge and architect Craig Roberts before a final decision was reached.

In 2009, we began to raise the funds necessary to restore the fountain, build the pool and replace aging asphalt walkways with St. Joe brick., the same paving material that has been used throughout the Gardens’ history. This company was founded in 1891 and is located in Slidell, La.

In early 2010, we were ready to move forward with the first phase for restoring and installing the fountain in a pool at the center of the Rose Garden. This first phase was made possible by the generous support of the Alabama Power Foundation, The J.L. Bedsole Foundation, The Crampton Trust, The Mary J. Larkins Foundation, The A.S. Mitchell Foundation, Regions Bank and The Sybil H. Smith Charitable Trust.

Although the fountain was in fairly good shape, it needed considerable restoration. We sought the advice of Scott Howell of Robinson Iron in Alexander City, Ala. Coincidentally, when Scott inspected the fountain, he realized that his firm had originally built the fountain for the Mall. Robinson Iron has been in business since 1946; among their notable projects are the restoration of the Vulcan statue in Birmingham, the fountain in Bienville Square, and projects at the White House, the Supreme Court and Carnegie Hall.

In January 2010, Robinson Iron workers transported the fountain from the Gardens to their facility to begin an extensive restoration project.

As part of the process, all of the ornamentation (acanthus leaves, dolphins, rams’ heads) attached to the fountain were detached, using small, abrasive blades to cut through the welds.

Old paint and corrosion for the entire fountain, including all ornamentation, was removed, using abrasive blasting. Before the ornaments were reattached, the inside surfaces were coated with zinc-rich urethane pre-primer, followed by a two-component epoxy primer. The ornaments were reattached using stainless steel fasteners rather than welds. The entire fountain was coated with zinc-rich urethane, followed by epoxy primer and two final coats of black acrylic polyurethane. 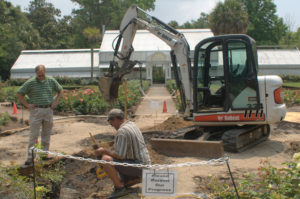 Before the fountain could be installed, a 20-foot-wide pool with a pedestal for the fountain was constructed by Bailey’s Pool Company of Mobile. The nearly two-ton fountain was installed by Robinson Iron workers, who used a lull to assemble the individual bowls of the fountain before the final plaster coat was applied to the interior pool walls. 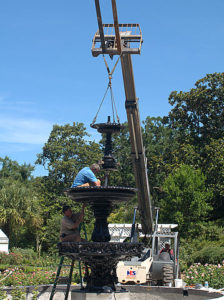 The final part of the project included the application of St. Joe brick to the exterior walls of the pool and installation of brick paving pathways around the pool and fountain. Turfmaster Landscape was the primary landscape contractor for the project.

We celebrated the installation of the fountain with our donors, contractors, Bellingrath Trustees and members of the Belle Camp Society on Sunday, July 25, 2010. Everyone was delighted with the beauty of the fountain and the refreshing sound of water cascading on a hot summer afternoon.

This year, we are working on plans for additional water features at Bellingrath. We will be adding another fountain in a new garden this fall, along the path between the Rose Garden and the Great Lawn.

Our friends at Bel Air Mall have also donated to us the cast iron fountain that was installed in the area outside of the J.C. Penney wing of the mall. This fountain is a smaller version of the Rose Garden fountain, and we hope to incorporate it into the Summer House Garden on the path near Mirror Lake. Stay tuned. 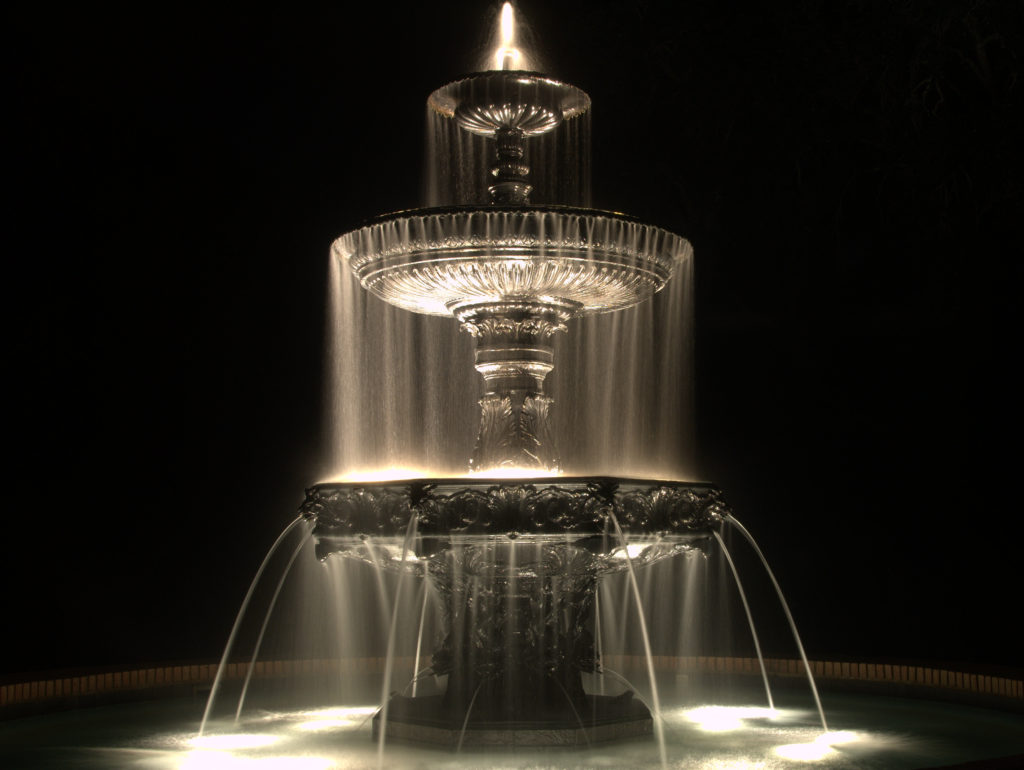