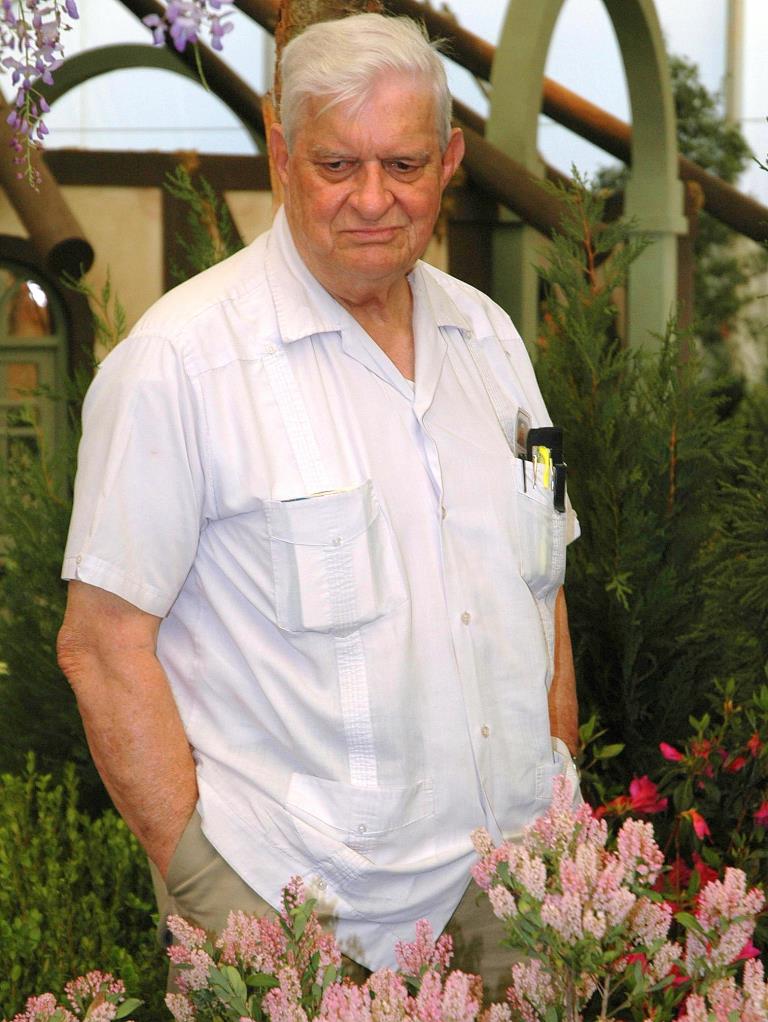 Pat Ryan is shown at the Festival of Flowers, probably in the early 1990s.

(This is the fifth in a series of profiles of people who managed the Gardens and Home in the early years.)

For more than 35 years, Harry F. “Pat” Ryan’s name was synonymous with Bellingrath Gardens and horticulture in Mobile.

Ryan joined the staff of Bellingrath Gardens and Home in 1965 as the landscape engineer, replacing Martin D. Greene, who had retired a year earlier. In a 1983 interview, Ryan recalled that he had visited the Gardens during Mr. Greene’s early tenure while a student at Auburn University in 1953.

During that visit, they were introduced to Walter D. Bellingrath, who offered the group a Coca-Cola. He remembered Mr. Bell walking over to a vending machine and, rather than opening it up, methodically depositing a nickel for each and every bottle. 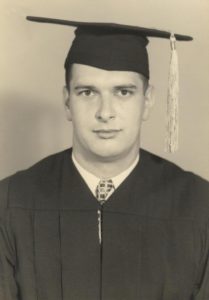 Not only did Ryan have memories of “Mr. Bell,” but he also recalled his memory of Mrs. Bellingrath from his childhood. A large black limousine had pulled up in front of the family home as Ryan’s stepfather and a helper struggled to dig up a large camellia. Bessie Bellingrath approached the two and said that she thought it was a beautiful bush and worth at least $600. Ryan’s stepfather announced that the camellia was not for sale, and explained that he was moving it to the back garden.

Within a year, that camellia was dead, and Ryan used to chuckle that his mother never let his stepfather forget that he had turned down $600 during the Depression and had nothing but a dead camellia to show for it.

Ryan arrived at Bellingrath at a time when the Gardens had only recently completed construction of the Cafeteria and Gift Shop, the Rose Garden Bridge and the Oriental-American Garden. For more than three decades, Ryan would oversee the seasonal planting of the flowerbeds and their maintenance, as well as keeping the grounds in pristine condition. 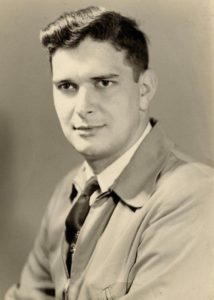 Ryan in his early years at the Gardens.

Four years after his arrival, Hurricane Camille struck the Gardens in 1969. Dozens of water oak trees splintered and collapsed. Outside expenses to handle the removal of the downed trees topped $15,000, and Ryan supervised the cleanup, which took several weeks.

Ryan and his wife, JoAnn, lived on the property, where they raised their children, Cathy, Maureen and Tripp. Their former home has been converted to office space, but is affectionately known as “The Ryan Home.”

The Gardens survived Camille, but had unprecedented damage in 1979 when Hurricane Frederic made a direct hit on the Gulf Coast. Bellingrath Gardens shut down for six months to allow time for the removal of thousands of downed trees and numerous crushed azaleas and camellias, followed by a monumental replanting effort. 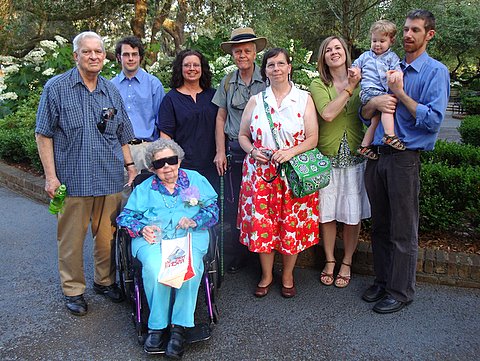 Pat Ryan, left, is shown with his family on a visit to the Gardens for the 2010 Mother’s Day Concert, in which one of his grandchildren performed with the Mobile Youth Symphony Orchestra. From left are T.J. Kennedy, JoAnn Ryan, Maureen Ryan Kennedy, Allen Metherell, Cathy Ryan Metherell, Ryan Olson, Nate Olson and Paul Olson.

Because the azaleas had been decimated by winds and falling trees, it was obvious there would be no Azalea Bloom Out in March. Instead, Ryan’s crew planted 40,000 tulips for the grand spring opening. When the Gardens reopened, a happy rush of visitors and reporters admired the floral show beneath a heavily damaged and rather vacant tree canopy. That night, an unprecedented cold snap arrived, and the following morning, 40,000 tulips fell victim to sub-freezing temperatures, turned black, and collapsed.

Many might have given up, by not Pat Ryan. The Gardens were replanted and he proudly supervised their re-growth as the year passed. His employees and coworkers always had a sincere respect and love for Ryan, and it showed.

In addition to his work at the Gardens, Ryan was a longtime contributor to the Mobile Press-Register. Thousands of readers learned about gardening in this region, thanks to Pat Ryan’s column. He was an active member of the Garden Writers’ Association, serving as President in 1992-93. He also gave countless volunteer hours to the Mobile Botanical Gardens, which later named their entry drive in his honor.

Following his retirement in 1995, Ryan volunteered for his church and worked part-time at Mobile Seed on Holcombe Avenue. Customers could always count on his friendly and accurate advice on plants and flowers. When he and JoAnn moved to Little Sisters of the Poor, he helped plant gardens throughout the campus and made sure that the Sisters and residents came to see Bellingrath Gardens and often as possible. As the Mobile Register once noted, Ryan was truly “a man with a green thumb.”

Ryan died on August 8, 2012, soon after the death of his wife. He was survived by his daughters, Cathy Metherell and Maureen Kennedy, as well as four grandchildren and two great-grandchildren.

Even during the cold season, Bellingrath Gardens is filled with blooms and beauty! Gulf Coast…

English Silver in the Bellingrath Home: The Tankerville Collection

By Tom McGehee, Museum Director of the Bellingrath Home While some of America’s finest silver…

The “Chrysanthemum Wedding” of 1906