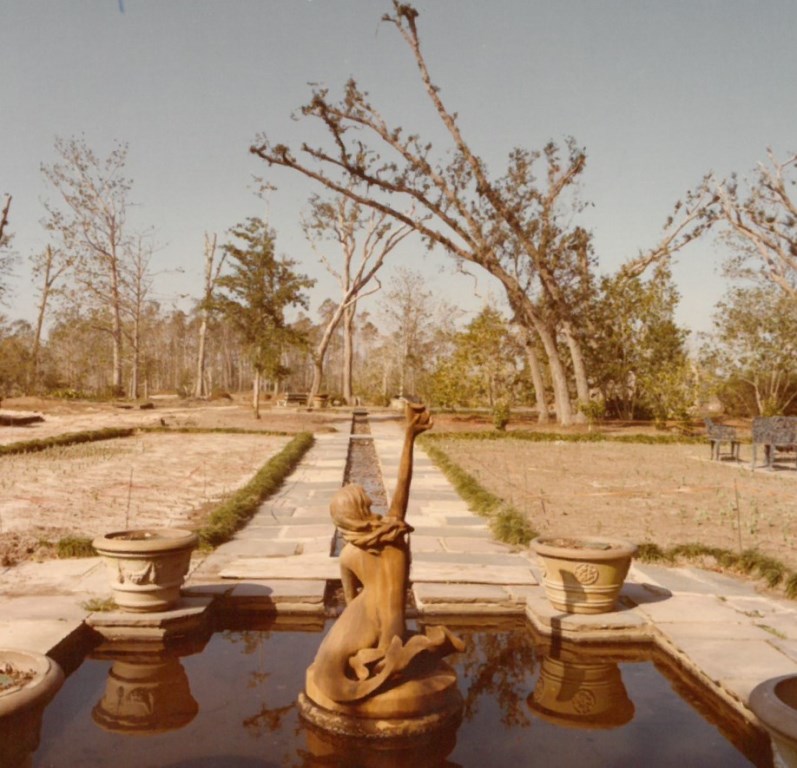 When Hurricane Frederic struck the Gulf Coast on September 12, 1979, the storm dramatically altered the landscape that Walter and Bessie Bellingrath had created on Fowl River. Bellingrath Gardens and Home was closed for six months as its staff struggled with the cleanup and repairs. 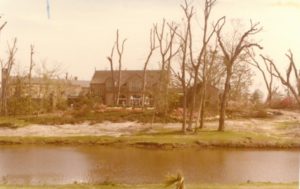 View of the back of the Delchamps Gallery of Boehm Porcelain from across Mirror Lake.

At the time, the Gardens had been a thriving tourist attraction for 47 years and had sustained only minimal damage from other storms, most notably Hurricane Camille 10 years before. The winds from Camille toppled several large oaks. After that storm, and the subsequent power outage, the staff purchased a generator to run the irrigation wells in similar emergencies.

Hurricane Frederic, however, caused widespread devastation.  The combination of high winds and falling trees wiped out hundreds of the azaleas and camellias that Bessie Bellingrath had planted in the 1920s and 1930s. The newly opened areas meant that sections of the Gardens that were once decorated with shade-loving plants were now more suited for sun-loving flowers and shrubs. 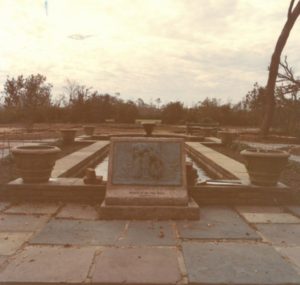 Most of the trees around the water feature known as Rebecca at the Well were destroyed. Today, the area is now filled with towering trees and is known as Live Oak Plaza. 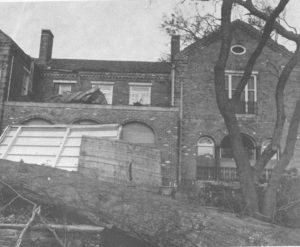 The second-story porch of the Bellingrath Home was toppled during the storm.

The Bellingrath Home lost many shingles, and its second floor, glassed-in porch shattered. The porch roof fell to the front of the East Terrace. Rainwater flowed into the main floor space, damaging the floors, furniture, walls, baseboards and carpeting.

At least two tornadoes swept through the Gardens during the storm, downing close to 3,000 trees. Mirror Lake was filled with debris and had to be dredged. 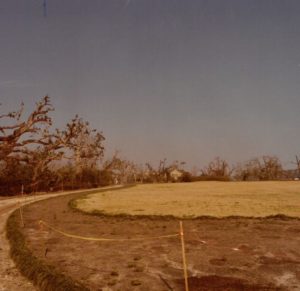 In a story dated December 9, 1979, Mobile Press-Register reporter Lolo Pendergrast wrote that more than one-half of a million cubic feet of debris had been removed at that point, “leaving a thick, pine-needled pile carpeting along the garden’s walkways.”

Pendergrast described total devastation in the Asian-American Garden: “… almost every bamboo fence and moss-dripping tree has disappeared or is beyond repair. All debris has been removed from this area, and a plan to rebuild will follow higher-priority Home repairs and landscaping.”

The Camellia Arboretum, which had been created in 1958, was essentially wiped out – a loss of 2,000 plants representing 750 varieties. The Camellia Arboretum had been planted beneath a pine forest, and these trees snapped and fell on the camellias.  What camellias survived faced a new problem: They had been thriving in partial shade, but were now in full sun, and suffered additional damage from the sudden increase in sunlight. The portion of the Gardens that included the Arboretum was permanently closed after Hurricane Frederic. 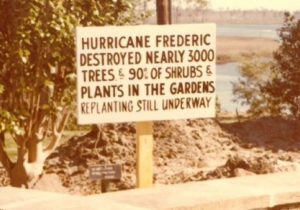 The irrigation system was destroyed. At least nine greenhouses were damaged beyond repair, and another seven were extensively damaged. The financial losses included $8,000 worth of poinsettias in the greenhouses. George Downing, chairman of the Bellingrath-Morse Foundation, estimated that the final cost would be $9 million to $10 million — $4 million for the Gardens and $3 million to $6 million to repair the Home. 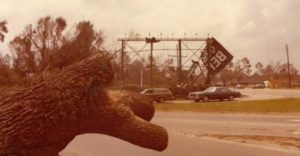 The directional billboard on Highway 90.

Many residents of Mobile and Baldwin Counties donated large azaleas and camellias for the restoration. Sidney Meadows of Flowerwood Nursery assisted in getting hollies, camellias, cleyera and other plants.

Mobilian Scott Rye was a freshman at Rhodes College in Memphis (one of three colleges that benefit from the Bellingrath-Morse Foundation) when the storm struck.  A few months later, his fraternity was asked to assist in the Bellingrath Gardens restoration effort. He writes:

“In December 1979, Mrs. Boyce A. Gooch, a long-time supporter of the college, died and left to Rhodes a sizeable portion of her estate, consisting of extensive stock holdings and real estate, including her magnificent East Parkway home, where the gardens encompassed a full city block. At the time, the gift was the largest single bequest ever made to the college. Mrs. Gooch had been well known for her horticultural interests. She had served as president of the Memphis Garden Club and was the Garden Club of America’s only merit award winner from Memphis.

“Somehow, word had reached the college that Bellingrath Gardens’ camellias had been devastated by Hurricane Frederic. As luck would have it, Mrs. Gooch’s garden was filled with a variety of camellias, so the decision was made to ‘give back’ to Bellingrath for its years of support to Rhodes by providing the Gardens and Home with healthy camellias.

“On a cold, wet Memphis afternoon, I joined fellow Sigma Nu pledges and active brothers at the Gooch estate and for the next several hours dug up and transported camellias to a waiting truck that had been rented for the job. I was happy to do so, having fond memories of visiting Bellingrath Gardens as a child with my parents. 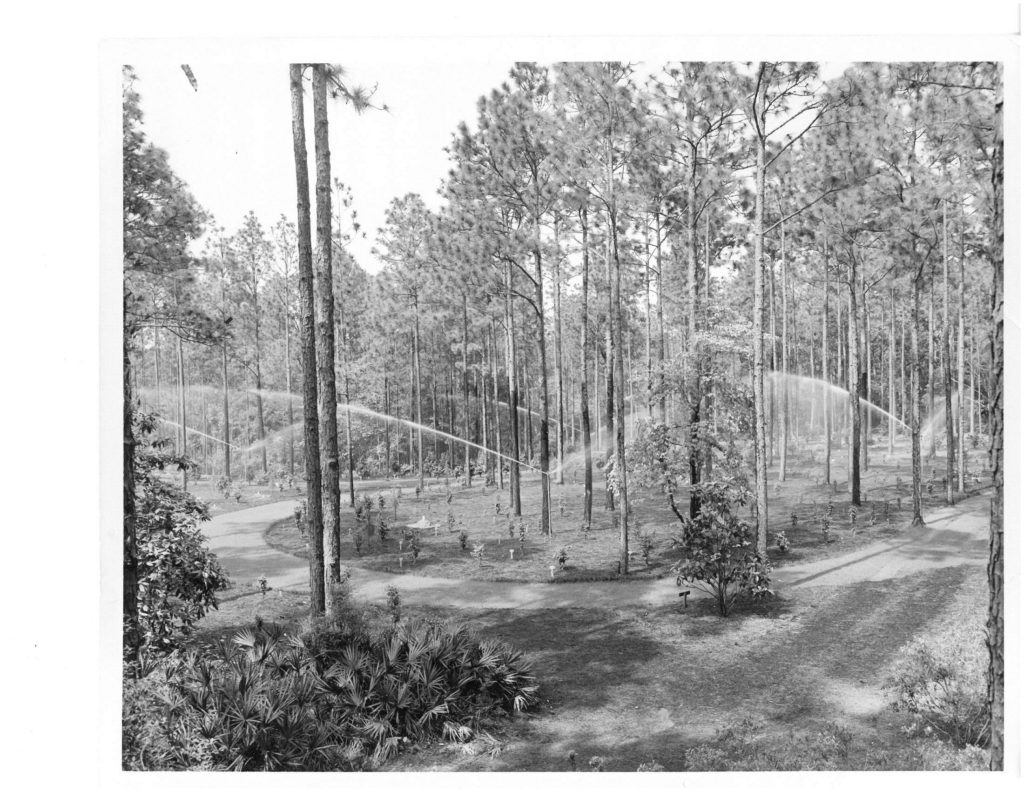 The newly-planted Camellia Arboretum at Bellingrath as it appeared before Hurricane Frederic.

“We carefully dug up the bushes, wrapped the roots in burlap, placed the plants in oversized wheelbarrows and trundled along muddy paths as intermittent rain showers dampened our clothes but not our spirits. In fact, despite the back-breaking work, everyone seemed happy to be a part of the task at hand, knowing that Mrs. Gooch would have been pleased that her camellias were being transplanted as part of an effort to restore the renowned Bellingrath Gardens.

“Finally, the job was finished, the large truck bristling with camellias. Two of the actives had volunteered previously to see the job to the end, and they departed on an overnight drive to Mobile while the rest of us sought warm showers and dry clothes, now with our own memories of what Hurricane Frederic had brought us.”

In addition to Mrs. Gooch’s camellias, according to information from the Bellingrath-Morse Foundation, the staff replanted 15,000 azaleas, 4,500 pine trees, more than 100 live oaks and “hundreds of specimen camellias, hollies, gardenias and other plants.”

Bellingrath staffers drew up a 12-point plan of action to give the Gardens a new look. All in all, it took work crews four months to remove the damaged trees and shrubs, and another two months to do additional cleanup and partial replanting. The Gardens managers had realized it would be at least another year before all the new azaleas were in place and the pruned, surviving azaleas bloomed again.

In the Rose Garden, staffers dug up an estimated 2,500 to 3,000 bushes, defoliated and trimmed them, and refrigerated them to preserve them for future replanting.

When the Gardens reopened on the target date, March 1, 1980, the gardeners’ troubles still weren’t over. The Rose Garden had been filled with 4,000 tulips to greet the crowds and reporters, but alas, a late freeze arrived on the next night, causing the newly-planted blooms to turn black and fall over.

In the decades since Frederic, the tree canopy has returned, and Bellingrath Gardens is now largely a shade garden again. There are, of course, many sunny spots, which allow for the colorful flower beds that visitors admire today: The Rose Garden, the Great Lawn and the Gazebo Garden. 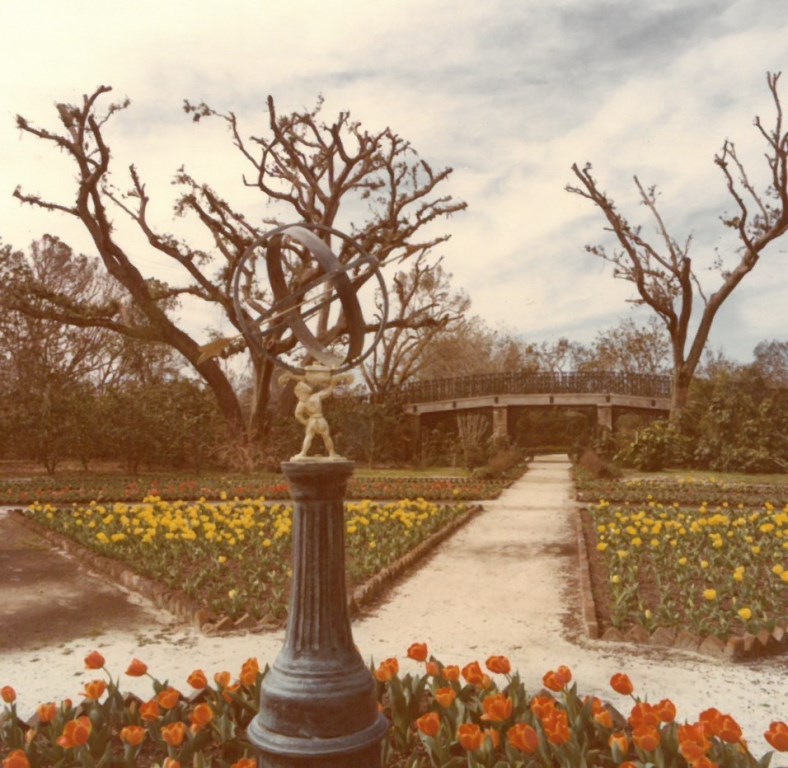 By Tom McGehee, Museum Director of the Bellingrath Home (This is the first of a…

Ornamental veggies at Bellingrath: Beautiful and nutritious, too

By Dr. Bill Barrick, Executive Director Remember when your mother told you to eat your…