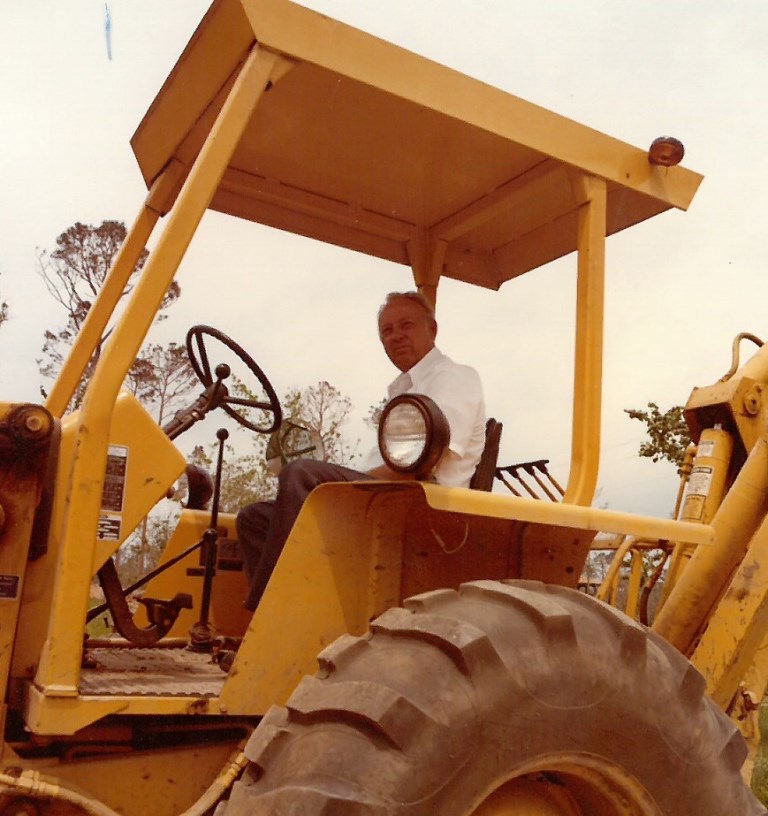 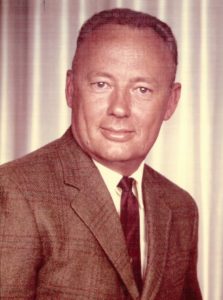 (This is the third in a series of profiles of people who managed the Gardens and Home after Walter Bellingrath’s death.)

For nearly 40 years, Bellingrath Gardens and Home had an on-site General Manager: John Mark Brown Sr., known to all as “Doc” Brown. “Doc” and his wife, Mary, lived in a riverfront home on Fowl River on the Bellingrath property, where they raised their three children.

“Doc” Brown died on Jan. 5, 2017, at age 88. He was a graduate of Auburn University, where he was elected a member of  Pi Alpha Xi for achievement in Horticulture, Landscape and Ornamental Horticulture. He started at Bellingrath Gardens and Home in 1956 as Assistant Landscaping Engineer, was promoted to Landscaping Engineer in 1964 and became General Manager in 1974. He and Mary retired from the Gardens in 1993.

“It was a busy life,” Mary Brown said, remembering the family atmosphere among the Bellingrath employees who reported to her husband. “They loved him,” she said. “He was one of them.”

“Doc” grew up with six siblings on his family’s 450-acre farm in Andalusia, and was in his element whenever he was working outdoors, Mary Brown said. He was particularly good at grafting camellias from cuttings, she said, and one of  one of his first responsibilities at Bellingrath was grafting camellia cuttings for the Camellia Arboretum. 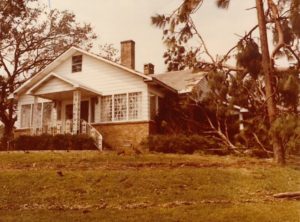 The Browns’ home on the Bellingrath property was damaged in Hurricane Frederic.

According to correspondence with the Bellingrath-Morse Foundation dated Aug. 26,1960,  Brown’s job included selecting plants for propagation; designing new trails and vistas throughout the Gardens; grafting; and planning a new irrigation system.

Her husband was a devoted employee, Mary Brown said, remembering that whenever frost threatened, he would often go to the Bellingrath greenhouses at 4 a.m. to tend to the plants.

The Browns’ home was originally built by Walter Bellingrath to house his first Landscaping Engineer, Albert A. Hunt, who was hired in 1934 and retired in 1954. When the Browns moved in, they had the property landscaped and added other improvements. The Browns’ children loved helping their father in the Gardens, Mary Brown said.

“Doc” Brown “was a hands-on person,” said Hilda Bodiford, who worked at Bellingrath in the 1970s as a teenager, when her mother, Thelma Watkins, worked in the Magnolia Cafe. “He loved getting out on the tractor, grading the service road, teaching the other gardeners,” she said.

Brown “was a character,” Bodiford said, and was never in a bad mood. “We always enjoyed working with him.”

“Oh! Beautiful Gardens, so cool and fair / That low humidity and abundance / Of fresh air. … With these blessings of weather / A Southern gardener’s delight / I found not even a smidge of that / dreaded petal blight!” He signed it, “P.B. Slimebloom.”

When the Browns first arrived at Bellingrath, Mary Brown was a schoolteacher. Her mother, Susie Cross, began managing the old snack bar in 1963, which was located where the Pet Motel now stands. After a new snack bar was built, Mrs. Cross managed it until 1972. In 1973, Mary Brown took over the snack bar and cafeteria, which for a time was called the Gardens Restaurant. In 1994, the name was changed to Magnolia Café.

During their time at Bellingrath, the Browns traveled to other prominent public gardens to get ideas, Mary Brown said. The couple visited Callaway Gardens in Georgia, Longwood Gardens in Pennsylvania, Butchart Gardens in Canada, the Biltmore Estate in North Carolina and Vizcaya Museum and Gardens in Miami, Fla.

Other trips included a journey in 1960 to Homestead, Fla., to bring back 500 orchids that had been donated to the Gardens by Brown’s aunt, Osie B. Wills; and a cross-country jaunt in 1965 with then-General Manager Fred Holder that included stops in St. Louis; Wisconsin; and Trenton, N.J., to visit sculptor Edward Marshall Boehm. (A collection of Boehm’s works is housed at Bellingrath in the Delchamps Gallery of Boehm Porcelain.) The Browns also attended International Horticultural Congress Conferences on behalf of the Gardens.

In the early 1960s, “Doc” Brown helped design what became the Asian-American Garden in an area then known as the “Bird Sanctuary.” He had seen similar gardens in Japan during his service with the U.S. Occupying Forces after World War II. (He also fought in the Korean War in 1951.)

Brown presided over more changes in the 1970s, when the Bellingraths’ former boat house was renovated into an elaborate pavilion, complete with swings and seats; Mirror Lake was dredged to increase its depth to five feet; and the bridge over the lake was replaced with new wood and hand rails, according to a 1977 article in the Suburban edition of the Mobile Press-Register.

Then, on Sept. 12, 1979, came Hurricane Frederic — and a great deal of damage. Brown had also faced a big cleanup after Hurricane Camille in 1969, but Frederic was a severe blow. “Ninety percent of the Gardens were destroyed, and that’s being conservative,” Brown told a Press-Register reporter in 1986. ” … When you put your whole life into something and it’s destroyed, it hurts.”

The Camellia Arboretum, featuring more than 1,100 plants, was among the sections of the Gardens that became a casualty of the storm. But Brown and his staff cleared away the debris and replanted trees, and the Gardens reopened in March 1980, nearly six months later.

Brown also reflected on post-Frederic damage in a Press-Register story in May 1983, which reported that the Gardens had about 2,400 trees uprooted or destroyed. Most were replanted, but having to bulldoze so many trees “was like losing a member of the family,” he said.

After the Browns left Bellingrath in 1993, “Doc” ran a wholesale nursery in Mobile for several years and Mary Brown returned to teaching. Their children, Marissa Womack, Tricia Ready and John Brown, have fond memories of growing up on the property and enjoying the outdoors, just as their father did, Mary Brown said.

“We had a blessed life,” she said.

The Secret Garden: A new place of serenity

By Bill Barrick, Executive Director The new Secret Garden, which is under construction now, is…

Camellias, “the aristocrat of Bellingrath Gardens”