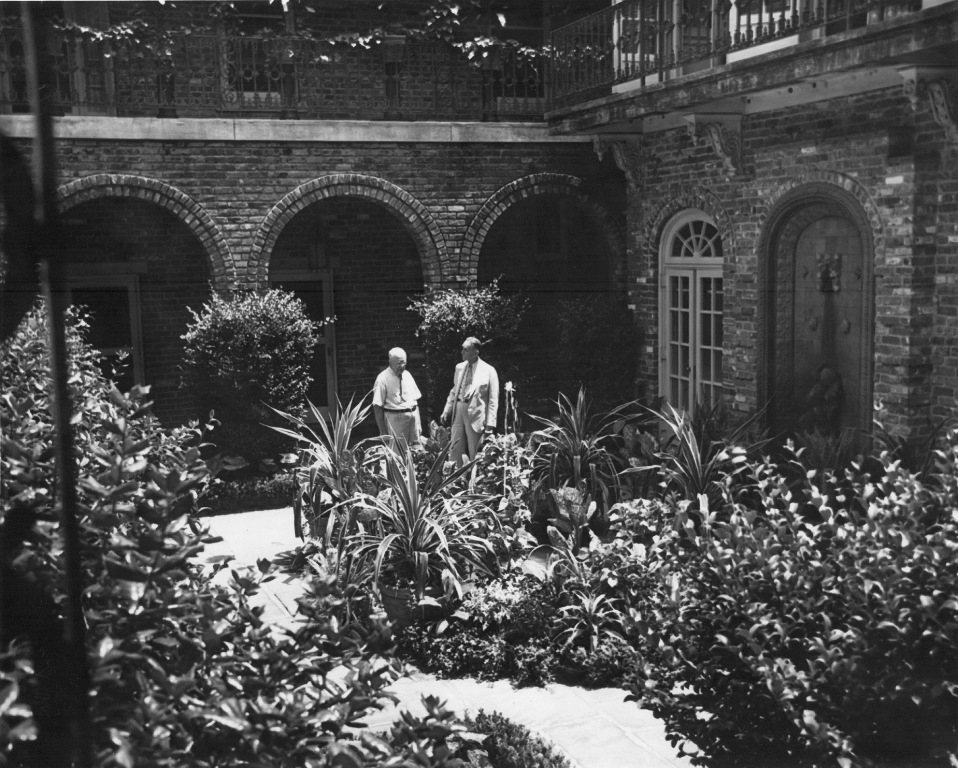 Albert Hunt, left, with Walter Bellingrath in the Courtyard of the Bellingrath Home, probably in the late 1940s.

(This is the fourth in a series of profiles of people who managed the Gardens and Home in the early years.)

In 1934, Walter and Bessie Bellingrath hired Albert A. Hunt as Landscape Engineer for Bellingrath Gardens. It was the first year the Gardens would be open year-round, and that may have prompted the couple to see expert help in the operation.

Hunt was an English landscaper with an impressive background. He had trained at the Royal Botanical Gardens at Kew and went on to do design work at several British estates. He was particularly proud of his time spent under the 5th Marquess of Landsdowne, whose Bowood Castle had been designed by Robert Adam and its park designed by Lancelot “Capability” Brown. 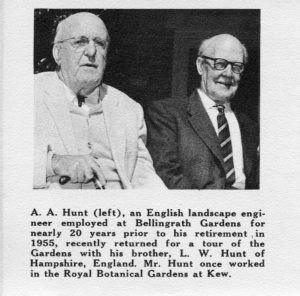 Mr. Hunt immigrated to the United States in 1906. He worked in New England and California before settling in Louisiana, where he was hired by Edward Avery McIhenny in 1924. “Ned’s” fortune was made on Tabasco, and he developed a 250-acre estate on Avery Island that he dubbed “Jungle Gardens.” The property eventually became home to a wholesale nursery operation, where he developed hundreds of varieties of camellias, azaleas, bamboo and iris. It also offered landscape architectural work.

In addition to design work at Jungle Gardens, Hunt drew up the plans for the grounds at Louisiana’s old and new capitols in Baton Rouge as well as improvements to the LSU campus there. The 1928 Mobile City Directory indicates that Jungle Gardens, Inc., had an office on St. Michael Street in Mobile with a sales location at 1009 Government Street. Albert A. Hunt was listed as its manager.

With Mrs. Bellingrath’s keen interest in gardening, it is very probable that she met Mr. Hunt while he was in Mobile. Jungle Gardens, Inc., was not listed in the 1929 city directory, which only listed Mr. Hunt, whose occupation was given as “Landscape Engineer.” His name does not appear again. At the time the Bellingraths might have first met him, however, their rustic Belle Camp retreat on Fowl River was still in the developmental stage.

Albert Hunt is shown at a hotel in New Orleans before making a presentation on behalf of Bellingrath Gardens in the 1940s.

Ernest Edgar Jr., the Bellingraths’ nephew, well recalled a visit made by his Aunt Bessie and Uncle Walter to Louisiana’s Jungle Gardens in 1934. They returned with samples of Mr. McIlhenny’s bamboo and could not stop talking about how impressed they were with Mr. Hunt. Within a week, Mr. Hunt was on the Bellingrath payroll and plans were being drawn for a new, riverfront home for the Hunts.

Albert Hunt spent the next 20 years working for Bellingrath Gardens. He was a valued employee and retired from the Gardens in 1954. He assisted with many projects over the years, and with his English design background, his work complemented that of architect George B. Rogers, who was certainly an Anglophile.

Mr. McIlhenny opened Jungle Gardens to the public in 1935; that property has been a popular Louisiana attraction over the years. Its future went on, however, without Mr. Hunt, who died in 1965 and is buried in Pinecrest Cemetery. The Hunts’ former home became the home of John “Doc” Brown and his wife, Mary, before it was renovated to serve as an office for the Southern Belle river cruise. Today, the home is vacant.

Here are links to the previous profiles in this series:

By Tom McGehee, Museum Director of the Bellingrath Home Mobile history buffs have a chance…