The Monolith, a well-known feature within Bellingrath Gardens, will reach its 70th anniversary in August 2021.

In 1950, Walter Bellingrath contracted with McNeel Memorials of Marietta, Ga., to develop plans for a memorial to tell the story of Bellingrath Gardens.  As the project developed, it was decided that it would require three full panels to complete the task.

Rather than using Georgia’s famed marble, McNeel selected red granite from Missouri.  And instead of shaping it into a formal obelisk, it was carved into a naturalistic, three-sided monolith, which stands more than 11 feet in height and weighs a staggering 18,000 pounds.

Bronze plaques were cast to tell the story of the Gardens and each is embossed with the blossoms of azaleas and camellias. They were designed by Betti Richard, a New York sculptress, who had created everything from a statue of St. Francis to a memorial to a racehorse. Her design in bronze for Mr. Bellingrath was cast in a Brooklyn foundry.

The idea of a plaque telling the story of the Gardens had been discussed before Mrs. Bellingrath’s 1943 death. At the time, the couple had thought such a marker would be placed at the entry gates.  In 1951, it was decided to place it at the heart of the Gardens.

The Monolith was installed near the Guest House (now the Delchamps Gallery) beneath one of the largest live oak trees on the property.  At the same time, a matching base of Missouri granite was cut for the 1938 plaque which citizens of Mobile gave to the Bellingraths as thanks for opening their gardens to the public.  Nearby, another piece of the same granite was used to hold a bronze relief of Rebecca at the Well.

On the triangular monument, the first plaque tells the story of the property’s transformation from “a semi-tropical jungle … into a Mecca for garden lovers.” The second panel is a biography of Walter and Bessie Bellingrath, who her husband described as “richly endowed with an appreciation of everything beautiful.” The final plaque honors architect George B. Rogers, explaining, “it was his interpretation of our dreams which resulted in the perfection of these gardens.”

According to an article appearing in the Mobile Register on Monday, August 6, 1951, an estimated 13,000 Mobilians had visited Bellingrath Gardens the previous day to honor Mr. Bellingrath in anticipation of his 82nd birthday and get a view of the new Monolith.

Although hurricanes and age have changed the landscape of the Gardens over the last six decades, the Monolith stands seemingly untouched, quietly telling the history of this property and the three unique individuals who created it. 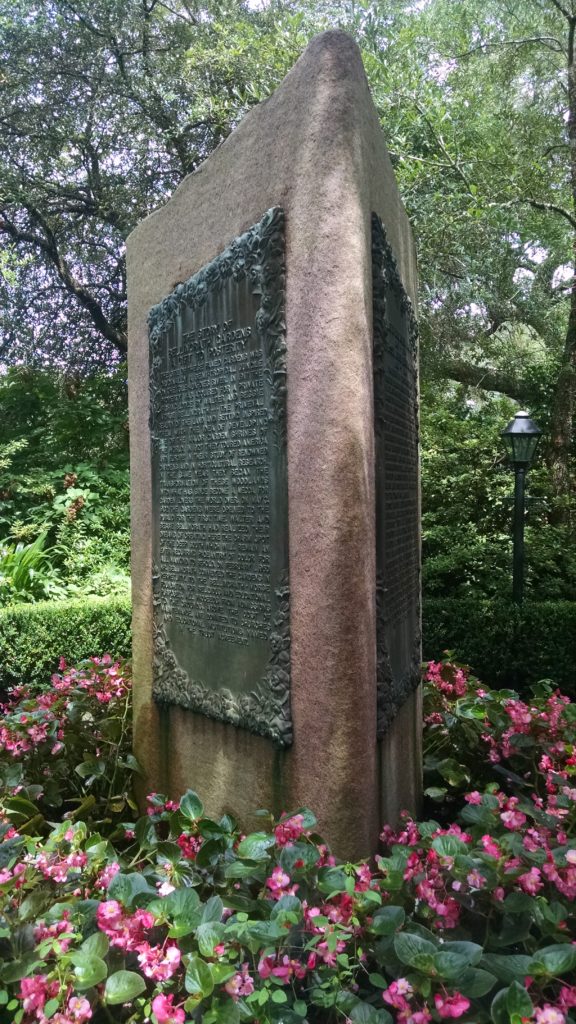 By Sally Pearsall Ericson Director of Marketing and Public Relations In the 1920s and 1930s,…