In the 1960s and 70s, artist Louise Estes was inspired by the beauty she found at Bellingrath Gardens and Home, where she meticulously recreated her favorite specimens of camellias, roses and other beautiful flowers in naturalistic watercolors.

In August 2016, Mrs. Estes, 93, recalled fond memories of her frequent visits to the Gardens, where she had special permission to select any flower that caught her fancy and then take it home to sketch and paint it. “Pat Ryan (longtime horticulturist at Bellingrath) was always so kind about giving me whatever I wanted,” she said. 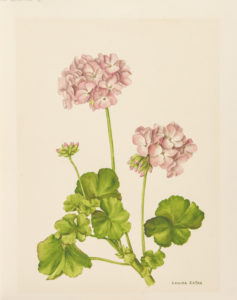 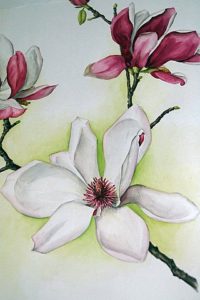 She painted more than 200 Bellingrath-inspired watercolors, many of which are on display at Bellingrath. Several of her works were featured on Bellingrath’s 2016 mailings.

From her earliest years, she said, “I always loved to paint,” enrolling in art classes whenever she could. At age 16, she won a scholarship to study art in New York City at the Traphagen School of Fashion.

In 1959, she and her husband, Bill, moved to Mobile from Opp, Ala. Her son, John, remembered accompanying her on her drives to Bellingrath, where he would explore the Gardens while she selected blooms to paint. “I remember being self-conscious” as his mother picked flowers, he said, even though she had permission to do so.

The pair would often visit the greenhouses, where Ryan would have his own floral selections for her. “They were really nice to us down there,” Mrs. Estes said.

John Estes is now a professional photographer based in Fairhope. His website, www.estesart.com, features his photos and his mother’s artworks. 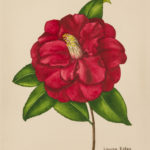 Mrs. Estes was always been generous with her art, donating many works to charity auctions and other worthy causes. “If someone came to town and they needed a gift, I’d give it,” she said. A typical photo in her scrapbook showed her presenting a painting to a Christmas event at the Richards DAR House Museum. 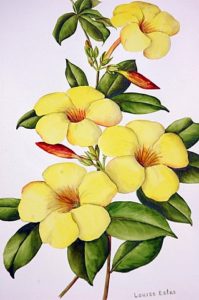 Her memorabilia included a few celebrity encounters, such a visit with Alabama Gov. George Wallace, when she presented him with one of her camellia paintings. People were especially excited, she said, when she met Minnie Pearl in Nashville, Tenn.

On April 17, 1992, Mrs. Estes was awarded a special recognition in the Mobile Press Register. “Your considerable talents have brought much attention to the area and have resulted in a rose being named after you. I am pleased, therefore, to present you the M.O. Beale Scroll of Merit,” the commemoration reads.

Mrs. Estes mainly created watercolors, but also dabbled with painting china and tile. However, it was difficult to have a kiln, she said.

Whenever she’d sit down to paint, she said, “The world went away.” “I thank God for painting,” she said. 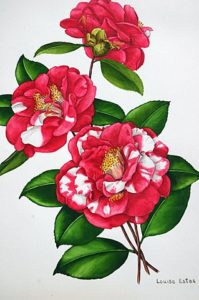 Mrs. Estes’s naturalistic watercolors have been exhibited at the National Arboretum (Washington, D.C.), the Arboretum at Cheekwood (Nashville), Callaway Gardens (Pine Mountain, Ga.), Bellingrath Gardens and Home, and many other galleries, as well as by organizations including the Garden Writers of America, Men’s Garden Club of America, the American Rose Society, and the American Camellia Society.

Two of her camellia watercolors hang in the State Dining Room of the Governor’s Mansion in Montgomery. In 2010, a selection of her paintings was exhibited at the Mobile Arts Council.

Mrs. Estes’s painting of “Iris” was included in the 6th International Exhibition of Botanical Art and Illustration at the Hunt Institute for Botanical Documentation at the Carnegie Mellon University and remains in the permanent collection.

In 1986, she was commissioned by the American Rose Foundation for a series of limited edition prints of her paintings of the “Dainty Bess,” “Touch of Class,” and “Europeana” roses.  In 1992, the Mobile Rose Society dedicated its annual Rose Show to her. Mrs. Estes was also named the Official Artist of the World Rose Society and she has had an award-winning rose named for her.

By Sally Pearsall Ericson Director of Marketing and Public Relations In the 1920s and 1930s,…