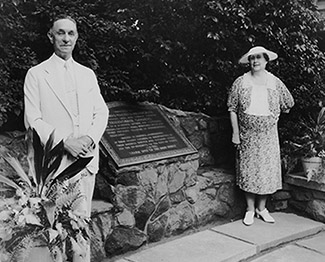 Bellingrath Gardens and Home was the creation of Mr. and Mrs. Walter Bellingrath. The Gardens first opened to the public on April 7, 1932. Mr. Bellingrath placed an ad in the Mobile paper, announcing that anyone who would like to see the spring Gardens could do so free of charge. After an overwhelming response, the couple decided to keep the Gardens open year round, beginning in 1934.

The Gardens were my wife’s dream, and I want to live to see that dream come true.

Though a native of Atlanta, Walter Bellingrath was raised in the small town of Castleberry, Alabama, where he got his start at the age of 17 with the Louisville and Nashville Railroad. His first job was as a station manager, and his duties included sending and receiving telegraph messages. His old telegraph key sits on his desk in the Bellingrath Home as a reminder of those simple beginnings with one of the South’s most generous benefactors. 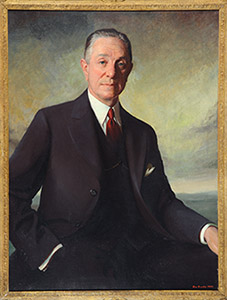 In 1903, Walter and his older brother, William, heard about an opportunity to purchase the new franchise to sell bottled Coca-Cola in southern Alabama. The franchise territory stretched down to the Gulf Coast, and when it was determined that they should split the territory, Walter took Mobile since, as he later joked, he liked to fish. The Mobile Coca-Cola Bottling Company became one of the most successful in the United States. Walter Bellingrath’s business interests stretched to owning the National Mosaic Tile Company, serving on the board of the First National Bank and owning a warehousing company. He was also an original founder of the Waterman Steamship Company of Mobile.

His interest in his adopted hometown led to his long association with the Mobile Chamber of Commerce. On two different occasions it was Walter Bellingrath who wrote a personal check to cover the entity’s annual financial shortfalls. He was a member of Central Presbyterian Church, where he served as a deacon.

I want to make the world better and brighter by my being here.

Walter Bellingrath married Bessie Mae Morse of Mobile in 1906. The couple had no children. After his wife’s death in 1943, Bellingrath dedicated the rest of his life to work on the Gardens she had worked so hard to create. “These Gardens were my wife’s dream,” he once said, “and I want to live to see that dream come true.”

In 1955, at his death at the age of 86, his estate had been converted over to the Bellingrath Morse Foundation to oversee the operation of his beloved Gardens and to open his Home to the public. To this day, profits beyond those needed to operate Bellingrath Gardens and Home benefit Central Presbyterian Church and St. Francis Methodist Church and provide scholarships at Huntington College in Montgomery, Alabama, Stillman College in Tuscaloosa, Alabama, and Rhodes College in Memphis, Tennessee (formerly Southwestern University).

Bessie Morse Bellingrath was one of nine children born to Sewell and Alice Morse of Mobile. Mrs. Bellingrath’s early interest was in the arts, but practicality led her to be a stenographer. Her last job was with the Mobile Coca-Cola Company. She married its owner, Walter Bellingrath, in November of 1906.

Mrs. Bellingrath’s love of gardens developed quickly. The couple’s South Ann Street home was long admired for its extensive gardens and became the basis for Mobile’s famous Azalea Trail in 1929. It was her idea to start planting azaleas at “Belle Camp,” an otherwise rustic fishing camp. Her husband always credited her genius for the creation of Bellingrath Gardens. 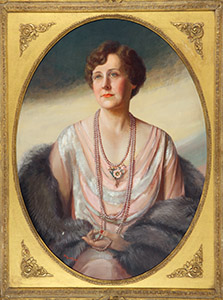 As the economic depression worsened, friends quietly kept Mrs. Bellingrath aware of families in need. She would appear, checkbook in hand, begging for an azalea, camellia or whatever bloom she saw in the family yard. She would convince the stunned homeowner that Bellingrath Gardens had been unable to locate one and then offer hundreds of dollars in an era when the U.S. Government declared that $25 per week was a comfortable income. She told a flower shop owner that her crocheted afghans were the most handsome she had seen and offered her $100 each for a dozen, knowing the money would put the woman’s niece in college, which it did.

Mrs. Bellingrath had a keen interest in antiques and collected from New Orleans to New York. Just as with azaleas, she always was ready to purchase an item brought to her porch in a car laden with children, paying top dollar for the family “treasure.” Antique dealers along famed Royal Street in New Orleans had few customers during the Depression and they saved their best for the lady from Mobile who never quibbled over a price. One dealer once admitted that when Mrs. Bellingrath arrived, prices doubled, but she never complained. She knew that her purchase might be their only sale of the week.

She had a great interest in her nieces and nephews, taking delight in her grandnieces and grandnephews as they visited. When one nephew admonished his young son for picking up one of this aunt’s breakables she overruled him. “Let him enjoy it,” she said. “If he breaks it, he breaks it. Don’t worry about it.”

Her household staff recalled her as always asking about their families and quietly handing out $20 bills for small tasks completed. She offered to help one young butler buy a car so he would not have to share a ride to work and he was astounded when she paid for the car in full. When he asked how much should be taken from his weekly pay check her response was swift: “That was a gift, not a loan.” And as an afterthought, “Now, not a word!”

After her sudden death in 1943 at the age of 64, the Catholic Bishop called to console Mr. Bellingrath and to ask permission for a group of nuns to say a prayer as a way of thanks for all that she had done for them. As the couple had been Presbyterians, this surprised Bellingrath who asked, “How?” Without his knowledge, she had been sending flowers to the Catholic Providence Infirmary every week. The staff had been instructed to place fresh flowers in anyone’s room who did not have flowers sent by family or friends.

I shall always think of you wandering through a lovely garden,
Like that which you fashioned with your own hands,
Where flowers never fade and no cold wind of sorrow,
Blights our hopes and plans—And on your face,
The peace of one whose whole life through,
Walked with God.
– Your devoted husband

Today, Bellingrath Gardens and Home is a unique icon for the Gulf Coast region, housing thousands of exquisite plants and flowers. The beauty of the Gardens has made it a perfect location to host community occasions such as weddings, birthdays and special events. There are many hands working together to keep the Bellingraths’ dream alive to create a place of beauty that enhances the community experience.