While some of America’s finest silver makers are well represented in the collection amassed by Bessie Morse Bellingrath, her most prized pieces were British in origin.  The oldest of these was known as the “Tankerville Collection,” and during Mrs. Bellingrath’s lifetime, these items were on display in the Dining Room of her home.

The name for this valuable collection comes from the prior owner, the Earl of Tankerville, which appeared on the bill of sale from retailer James Robinson & Co. in midtown Manhattan. No other information was included about who this gentleman was or why the items were put up for sale.

Within the archives was a 1957 news clipping entitled “British Castle is Offered Free.”  The article went on to say, “The Earl of Tankerville has put his 11th century castle on the market – rent free … The castle in Northumberland, about 15 miles south of the Scottish border consists of four towers and 50 rooms. Chillingham Castle is ghost free.”

As it turns out, the 1957 Earl was the son of the man whose silver collection had been sold to Mrs. Bellingrath more than 20 years earlier.  The 7th Earl of Tankerville, George Montagu Bennet, had been born at Chillingham in 1852.  He traveled for a number of years in the U.S., where he tried his hand at “Cowpunching,” singing in religious revivals, and performing as a clown in a circus. 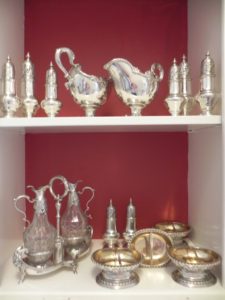 The Earl met his wife in New York, where he accidentally fell into her lap performing a somersault at a dinner party.  The couple returned to England when he acquired his title and they had four children.  Escalating taxes following the First World War destroyed many an English fortune.  Before his death, the 7th Earl had sold off much of the real estate surrounding the family castle and apparently a good bit of the family silver as well.

The Tankerville Collection today is on display in the Butler’s Pantry of the Bellingrath Home, resting safely behind a pane of plate glass.