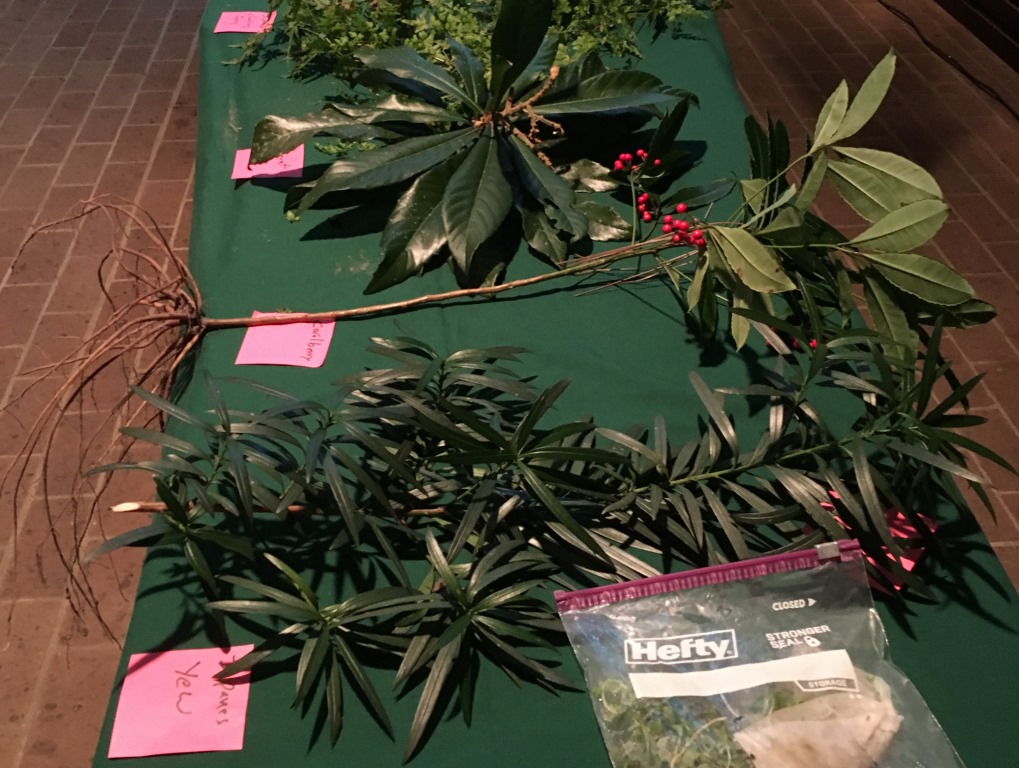 Beau Brodbeck brought samples of common invasive plants to Bellingrath for his presentation on January 23, 2019. From the top are the Loquat, the Coralberry, and Yew podocarpus, also known as Buddhist Pine. 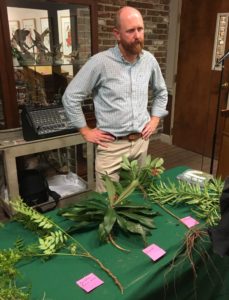 Beau Brodbeck, an Extension Forestry Agent and an Affiliate Faculty in the School of Forestry and Wildlife Sciences at Auburn University, presented a program about invasive species management on January 23, 2019, at Bellingrath Gardens and Home. Here are a few highlights from his presentation.

The numbers: The state of Alabama harbors more than 500 invasive species; about 380 of those invasives are plants. Those plants have a big impact: 400 out of the state’s endangered 958 plant and animal species are in trouble because of competition or predation from non-native species. Invasive plants are also blamed for reducing forest productivity. It has been estimated that invasive plants were responsible for $97 billion in losses to the timber industry between 1906 and 1991.

History: Many invasive plants were introduced as solutions for soil erosion or stabilization, such as Kudzu, Cogongrass and Sawtooth Oak. Cogongrass was also tested as a potential forage crop for cattle, until the farmers noticed that the animals refused to eat it. Others, such as the Bradford Pear, Camphor Tree, Chinese Privet, Chinese Tallow Tree (often called “popcorn tree”), Coral Ardisia (known as Spiceberry or Coralberry), Japanese Climbing Fern and Pampas Grass, were all originally brought in as ornamentals. 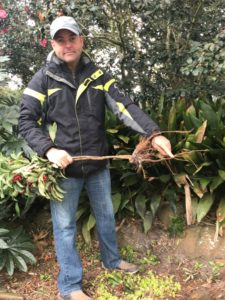 The invasive Coral ardisia, also known as spiceberry or coralberry, has pretty leaves and berries, but can form dense clusters that crowd out shorter native plants. 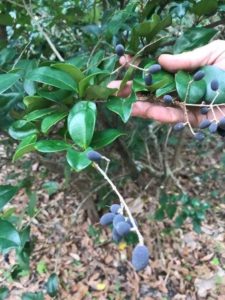 Birds love the blue fruits of the Chinese privet, but the plant causes problems when it grows in dense thickets.

Characteristics: Invasive plants tend to be extremely competitive, to the point that they crowd out native plants. Case in point: The Kudzu vine, which can grow as fast as six feet a day during the summer and forms thick mats over trees and native plants, killing them. In addition, invasives are tolerant and adaptive to their environments, especially where they have no natural predators. They are also adept at hybridization and reproduction; for example, the Bradford pear was a cultivar and thought to be sterile, but it has now evolved to become fertile, and its new form has very sharp thorns. “We’re trying to discourage people from planting them,” Brodbeck said.

How they spread: Whenever there is a “site disturbance,” that’s an opportunity for invasives to move in and get established. The Cogongrass root systems are especially good at riding along on mowing equipment, then regenerating in freshly plowed fields and along roadsides. Of course, the ultimate site disturbance is a hurricane; Chinese Tallow Trees were quick to take advantage when felled trees were cleared away from previously forested areas after Hurricane Ivan in 2004. 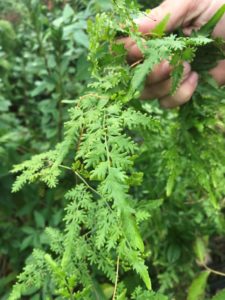 The Japanese Climbing Fern can actually cause controlled burns to spread upwards into tree canopies.

How to control common invasives: For most unwanted plants, the Alabama Cooperative Extension System recommends a combination of herbicides and elbow grease. When soils are moist, pull up younger plants by hand, doing your best to bring up the entire root system. For older plants, chop them down and treat the stumps with herbicide. In many cases, it’s best to mix your own herbicide to add the right concentration of glyphosate or triclopyr amine; the “ready to use” options may not be strong enough. Of course, herbicides must be used with care, to avoid damaging your favorite plants. For example, if the Japanese Climbing Fern has invaded your azaleas, it’s far better to dip a glove in the herbicide and coat the leaves of the invasive by hand instead of spraying it. 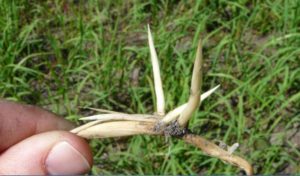 Cogongrass is in its own management category. Its sharp rhizomes make it nearly impossible to pull by hand, and tillage only works if you’re willing to keep at it for a very long time; otherwise, you’ll end up with an even thicker patch than you started with. The Alabama Cooperative Extension System advises against using controlled burns, because the plant can actually burn hot enough to kill native species around it. The most effective management program is several years’ worth of annual herbicide treatments.

Click here to view a Powerpoint of Beau Brodbeck’s presentation.

Dr. Bill Barrick is Honorary Chairman of 2016 Festival of Flowers

By Tom McGehee, Museum Director of the Bellingrath Home American prosperity during the 1920s brought…

By Tom McGehee, Museum Director of the Bellingrath Home When Walter Bellingrath purchased the Fowl…