In 1903, Walter Bellingrath and his brother, William, ventured into an exciting new enterprise when they purchased franchise rights to sell Coca-Cola in Alabama. The brothers bought the Montgomery franchise for $5,000, and soon earned enough to purchase the Mobile branch for $10,000. Walter, 34, took the reins and relocated because, he explained, “I love to fish!”

Coca-Cola was still a fairly new product. The soft drink was created in 1886; five years later, druggist Asa Candler purchased all rights to the drink and began to promote it across the country, making it available in all states and territories by 1895. He sold the rights to bottle the product in 1899, and the first bottling plant was opened in Chattanooga, followed by one in Atlanta.

The rights to bottle Coca-Cola were soon being sold on a franchise basis to entrepreneurs across the country and later to the world. Between 1899 and 1903, 379 bottling plants opened in the U.S., including one in Mobile in 1902.

Walter Bellingrath arrived in Mobile on Aug. 17, 1903, to take over the ownership of the Mobile Coca-Cola Bottling Company, which originally stood at 120 North Water Street. The Sept. 27, 1906 hurricane caused a great deal of damage from flooding, so he moved the business to higher ground on North Royal Street, where his operation would remain for some 60 years.

The 1908 Mobile Register reported that his plant “has again been improved. A germ-proof filter and a storage tank with 2,500 gallons capacity have been installed. The establishment has 20 employees.”

Bellingrath began business with one mule, a wagon, an assistant and a primitive hand-and-foot-powered bottling machine initially capable of producing only a few cases per hour. He wore heavy gloves, a leather apron and a face mask when bottling Cokes, to protect himself from exploding glass. Then, he and his helper would drive the wagon around the city, making deliveries and giving sales pitches to saloon owners, restaurant managers and any other potential businessman who would listen.

After selling his soft drinks, Bellingrath would retrieve most of the bottles, wash them by hand and refill them for the next day’s delivery. Not until the business became more successful did he have money to purchase extra bottles. Eventually, he became the first bottler in Alabama to have motorized delivery vehicles.

By 1910, Mr. Bell took out newspaper ads with a photo of his plant, which declared it “The Most Sanitary Plant Devoted to Bottling Soda Water in the South,” while warning the public to “Always inspect the cap on the soda you buy and avoid dangerous and cheap imitations of Coca-Cola!” 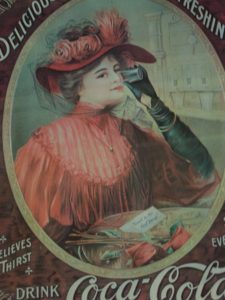 By 1948, the Mobile Register reported, the Mobile plant was ranked among the 14 largest Coca-Cola plants in the nation, exceeded in sales and volume “only by plants in Atlanta and New Orleans.” This was also the year that Mr. Bell was inducted into the “Half Million Gallon Club” for his plant having used a half million gallons of syrup in a year’s time. By comparison, in 1904, he had only used 365 gallons of the syrup!

Bellingrath was creative with his marketing, but possibly his most revolutionary idea was to advertise Coca-Cola in the wintertime, in an era when other franchises only promoted the drink in the summer. His sales increased during the cold months, and soon other bottlers were following his lead. Coca-Cola became “the year-round drink.”

In 1923, he also introduced Mobile to the six-pack, take-home carton of Cokes, at the price of six bottles for a quarter, plus deposit. Electric refrigerators were replacing the smaller ice boxes, and there was now room for bottles of Coca-Cola alongside the other staples. Also in the 1920s, annual sales of bottled Cokes surpassed soda-fountain sales, and bottlers such as Mr. Bell saw unparalleled prosperity. 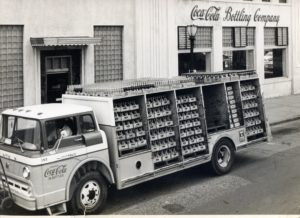 By now, Bellingrath had purchased a rustic fishing camp on the Fowl River as a weekend retreat, and his wife, Bessie, had begun bringing azaleas and camellia to the property from her extensive gardens in Mobile.

After the couple took a trip to Europe in 1927 and became inspired by the beautiful gardens they toured there, they hired prominent Mobile architect George B. Rogers to transform the fishing camp into a garden estate. Often, Coca-Cola trucks were used to haul old-growth azaleas and other large trees and plants into the Gardens. The Gardens opened to the public in 1932, and the Home was completed in 1936.

Thus, the fortune created by Mr. Bellingrath’s successful Coca-Cola franchise led to the creation of one of the nation’s most beautiful public gardens. Today, visitors to the Bellingrath Home may view Coca-Cola awards received by Mr. Bell and his bottling plant, examples of early soda bottles in use in Mobile and even a signed photograph of Asa Candler.

The original letter outlining the sale of the Coca-Cola plant to Walter Bellingrath hangs in his bedroom, as a reminder of where it all began.