The first time I ever saw cascade chrysanthemums was in 1964 on an Auburn University horticulture class field trip to Bellingrath Gardens. The spectacle of mums hanging from the balconies of the Bellingrath Home and the Boehm Gallery was amazing, and I had a million questions for my professor on how these mums were produced. 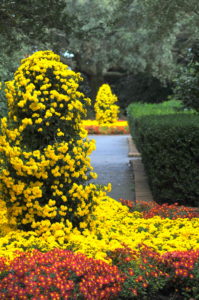 Up to this point, my knowledge of chrysanthemums was limited to garden mums, florist-potted mums and pom-pom mums being worn as corsages at Auburn home football games.

Since those early days as a horticulture student, I have seen many dramatic displays of cascade mums in Longwood Gardens in Pennsylvania, Callaway Gardens in Georgia and at the New York Botanical Garden, but the mums grown by the staff at Bellingrath rival any displays in America. Thanks to our Gulf Coast climate, our show is the largest outdoor display in the country. 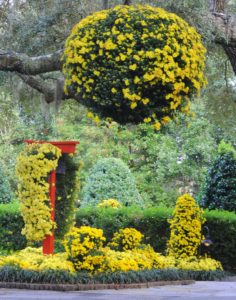 As stunning as these mums are when they are in full bloom, it is even more amazing to consider the 10 months of effort that it takes to produce them. Cascade mums are grown from special varieties of chrysanthemums from China and are noted for their freely branching character and trailing habit of growth.

These cascade varieties are very different from the garden mums found in big box stores in September and October. In addition, the culture of garden mums has changed dramatically in the 40 years that I have been working in horticulture. For example, when I began working at Callaway Gardens in 1980, our production staff hand-pinched all our garden mums several times during the summer in order to produce full-flowered plants. With the advent of growth regulators, manual pinching was replaced by growth regulator sprays that “chemically pinch” the garden mums instead. 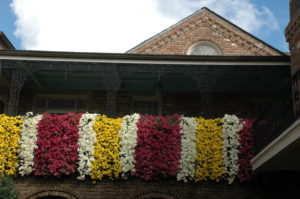 However, cascade mums require meticulous pinching and shearing to produce the branching and blooms that create the beautiful displays we set out each November. We begin work on the display each January with cuttings taken from stock plants and cultivated in our greenhouses until the middle of June, when the production shifts outdoors.

The cascades are created when three plants are potted into five-gallon containers and then placed onto the growing racks, which are four-foot-long raised platforms with hardware cloth at a 45-degree angle to the ground. The mums are trained along bamboo stakes and sheared every 10-14 days throughout the growing season in order to create many lateral shoots and fuller overall plants.

When the cascades are just beginning to show color in late October and early November, the gardeners begin to move the mums out into the gardens. This is done with great care, because the long, fragile cascades can easily be broken during the process. The cascade mums are also grown as columns and spheres in order to add variety to the overall display throughout the Gardens.

I always marvel at the commitment of 10 months to produce plants that typically bloom for only three weeks. We’ve had a very warm fall this year and that may mean that the bloom dates of the 2016 Fall Outdoor Cascading Chrysanthemums will linger throughout November.

I often refer to Bellingrath’s mum display as “big time horticulture,” and it should not be missed by anyone within driving distance of the Gardens. We hope that you’ll take advantage of the opportunity to view one of Bellingrath’s signature seasons. 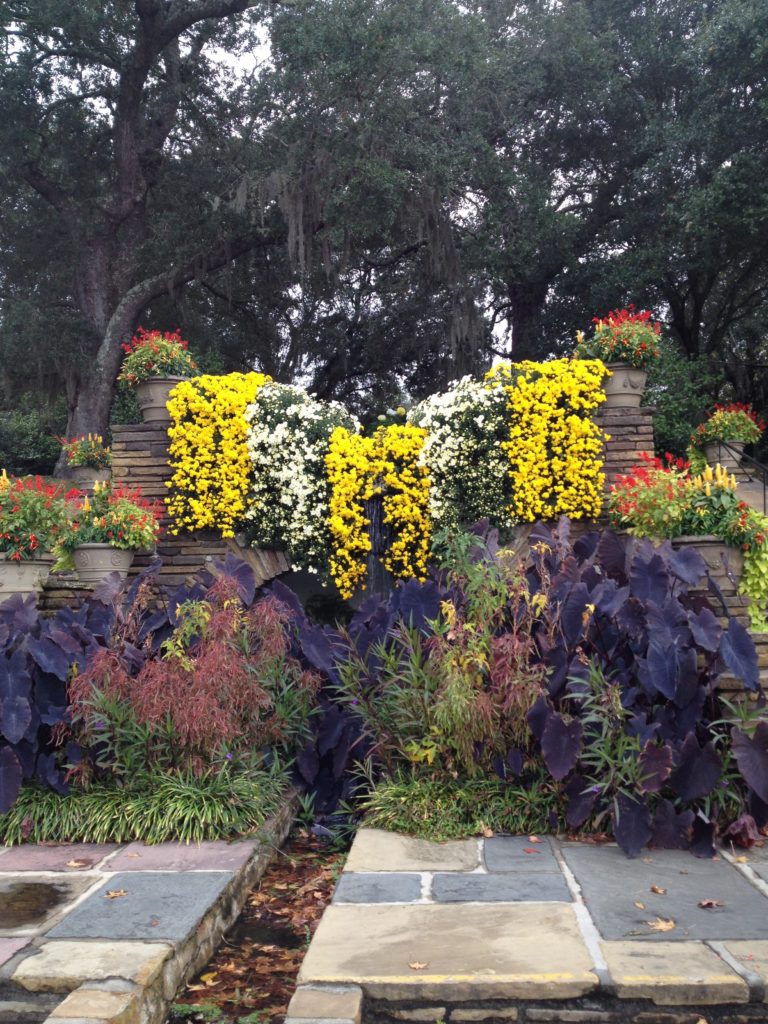