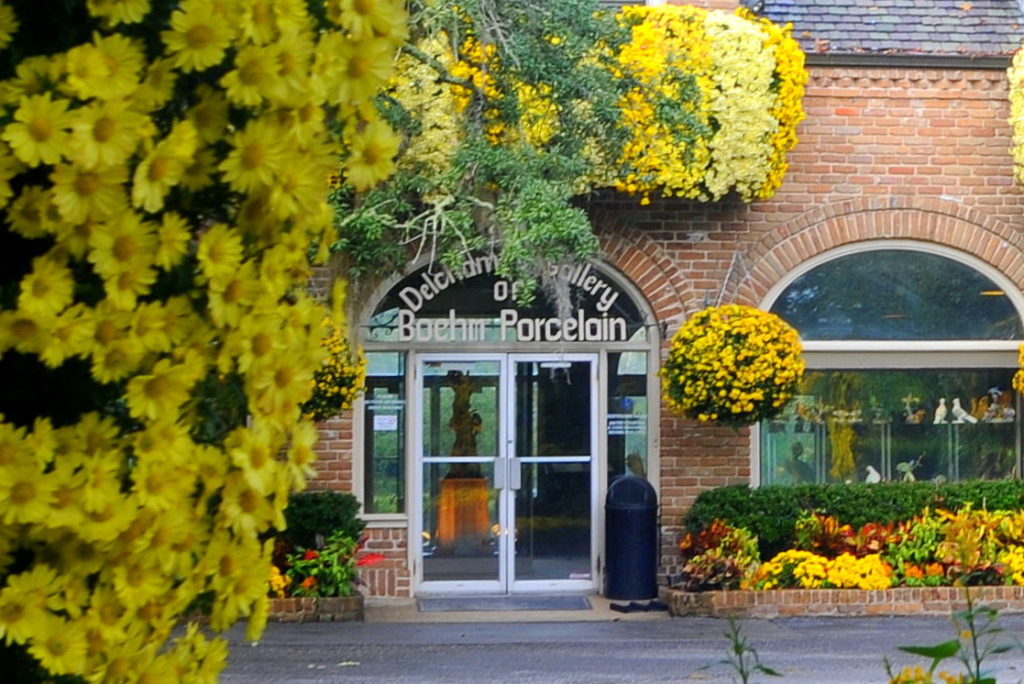 The Boehm collection (pronounced “beam”), the largest display of its kind in the United States, was donated to the Gardens and Home in 1967 by members of the Delchamps family of Mobile – a name synonymous with a chain of local supermarkets since the 1920s. Oliver Delchamps was a longtime trustee of the Bellingrath Morse Foundation, which Walter Bellingrath established to continue the mission of the Gardens and Home after his death.

To house the collection, the former Bellingrath guest house and garage was remodeled and enclosed. On March 9, 1967, the building was renamed the Delchamps Gallery of Boehm Porcelain during a formal ceremony. At that time, Boehm porcelain was a staple in the best department and jewelry stores across the country.

Mr. Boehm and his wife, Helen, were among the distinguished guests at the gala, along with the donors, Oliver and Alfred Delchamps and their sister, Mrs. Annie Delchamps Moore. The master of ceremonies was former New Jersey Governor Robert Meyner. Mrs. Moore presented the initial collection of 86 pieces on behalf of the Delchamps families.

The audience included members of the Bellingrath family as well. Mr. Bellingrath’s nieces, Elsie Stebbins of Little Rock, and Montgomery residents Jean Lane and Elmore Bartlett were in attendance, as was current board member Elmore Bartlett Inscoe.

For the dedication, in tribute to the generosity of the Delchamps families and for their warm friendship with Mr. and Mrs. Oliver Delchamps, Mr. and Mrs. Boehm donated a special sculpture, “Ivory-Billed Woodpeckers.” 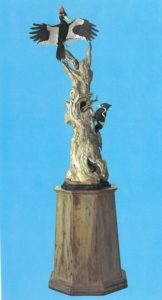 The piece, 7 feet tall on its plinth, had been originally created for a special exhibition of the artist’s work held in London in July 1964. Only three examples of the large ivory-billed woodpeckers were created, and the piece on display at the center of the Delchamps gallery took Mr. Boehm five months to build.

It was also at the party that Mr. Boehm told George Downing, Bellingrath’s Executive Director at the time and an executive with Mobile’s Coca-Cola Bottling Co., that his late mother had been an early model for the beverage. He added that he had lost his mother as a toddler and had never seen a picture of her.

Mr. Downing later contacted the Coca-Cola archives in Atlanta and found the poster featuring Mrs. Boehm and had copies produced. According to Mr. Boehm’s wife, Helen, that poster became one of her husband’s most prized possessions.

Mr. and Mrs. Oliver Delchamps also donated large collections of Boehm porcelain to the New Jersey State Museum in Trenton, N.J., and to the John F. Kennedy Center for the Performing Arts (made jointly with Dr. and Mrs. Samuel Lombardo of Jacksonville, Fla.).

Mr. Boehm, who had grown up in an orphanage, trained to be a veterinarian’s assistant. He had a love and knowledge of animals that he was able to transfer over to his sculpting.

He first tried his hand at sculpting in the late 1940s. His wife was convinced of his talents and worked tirelessly getting the word out. While selling dental equipment in Manhattan, she spent her lunch breaks showing her husband’s work to the city’s retailers.

By 1951, many of his first subjects were dogs and a collection of his work was displayed in the Fifth Avenue show windows of Black, Starr and Gorham. This elegant jewelry store placed his sculptures among the gleaming silver trophies to be awarded to the winners of that year’s Westminster Dog Show. 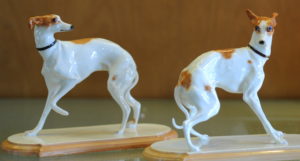 As can be seen within the Delchamps Collection, these dogs were glazed. It was not until 1953 that Mr. Boehm perfected his matte finished pieces. A year later, his first sculpture of birds among flowers was unveiled: The Kinglets.

It was in 1954 that a tradition began: Boehm porcelain in the White House. It was that year that Mr. Boehm presented Dwight Eisenhower with his Hereford Bull. Within four years, the President was presenting Boehm pieces as state gifts, a practice that would carry on with Richard Nixon’s arrival in China with a pair of Boehm’s Mute Swans in 1972. 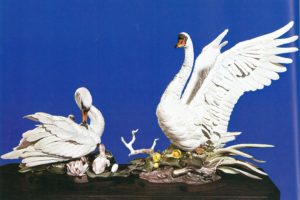 Mr. Boehm unfortunately did not live to see his swans arrive in China. He was stricken with a fatal heart attack in January 1969. He had created over 350 incredible sculptures over a 20-year career.

Helen Boehm carried on her husband’s work for nearly 30 more years before she retired. She died in 2010 at age 89.

In 2015, the assets of the Boehm Porcelain Company, based in Trenton, N.J., were purchased by the Museum of American Porcelain Art  in Cleveland, Ohio. The company was reopened as The Boehm Showroom, and still manufactures porcelain figurines. The Showroom also provides repair and restoration services for all types of porcelain art. The company website is theboehmshowroom.com. 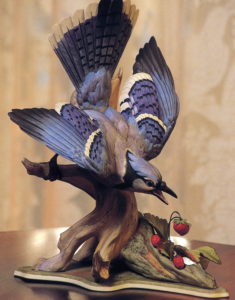 Boehm porcelain has been admired for more than 60 years, and guests at Bellingrath Gardens and Home have a unique opportunity to see some of the finest works ever produced by Mr. Boehm, as well as the firm in the years after his death. These range from his early glazed pieces through the numerous birds and flowers he created. There are later camellias and roses, as well as a series of American and English plates featuring his designs. All of the rare, early Boehm porcelain works are represented in the collection.