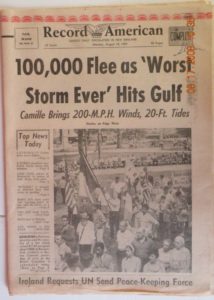 Mobilians on Saturday, August 16, 1969, awoke to a front page story about a hurricane named Camille. Long before Doppler Radar and spaghetti models, a simply drawn map carried the notation that the storm was “expected to shift to a northerly course which would put it on land between Panama City and Fort Walton Beach.”

Satellite images in those days came from one or two passes over a storm during a 24-hour period.

A day later, it was obvious that the storm was moving westward. As it passed some 250 miles south of Mobile, surface winds of 201 miles per hour were recorded. On Sunday night at about 11:30 p.m., Camille roared into the Mississippi Gulf Coast between Bay St. Louis and Pass Christian with winds estimated to have topped 190 miles an hour accompanying a 22.6’ storm surge. All storm instruments were destroyed, so the wind’s actual speed will never be known. 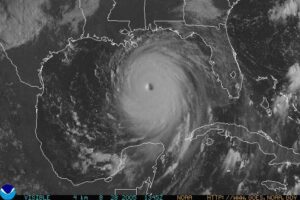 The storm roared northward and weakened. The death toll stood at 172 and the bodies of 27 victims would never be recovered. Some 15,000 residents were now homeless and the area’s roads, bridges, railroad lines and airports were essentially destroyed.

Mobile fared far better that night. Rainfall ranged from 6 to 12 inches and downtown had up to 18” of flood waters as far west as Royal Street. High gusts of wind during the night had showered the city with leaves and tree branches. 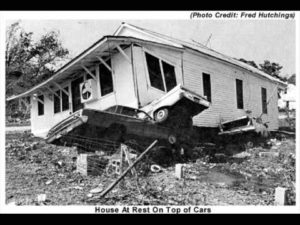 An evacuation order on Dauphin Island had been ignored by 52 residents, who found themselves stranded without drinking water, electricity of telephone service for days. A number of homes at the island’s western end were destroyed by the powerful surge. The approach roads to the bridge were completely submerged and the Cedar Point Pier was gone.

Bellingrath Gardens also fared comparatively well that night. After a day of cleanup, the employees had the property ready for visitors. Bellingrath’s hard-working staffers little knew of the destruction awaiting them a decade later, when a storm called Frederic would arrive.