According to those who knew her best, Bessie Morse Bellingrath “hated liquor worse than God hates sin.” And yet, her collection includes a wide variety of beautiful objects created to serve or contain everything from gin to champagne.

Displayed throughout the Home are case glass decanters, Sheffield wine coolers, a ceramic book disguising a liquor flask and assorted glassware designed to serve an array of wines and liqueurs.

Here is a closer look at some of the pieces she collected. 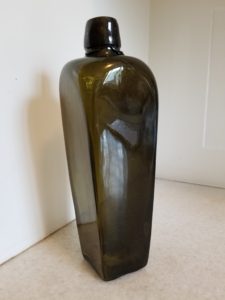 A Case Gin Bottle:  Although most people associate gin with the British, the drink was actually a Dutch creation of the early 17th century. Dutch soldiers regularly imbibed a shot before entering battle; hence the term “Dutch Courage.” When  Dutch-born William of Orange was crowned King William III of England in 1672, the Dutch spirit came with him. Hand-blown bottles such as this one were used to ship the gin from Holland within wooden cases. By 1730, the average Londoner was consuming 14 gallons of gin per year, and the product has seemed very English ever since. 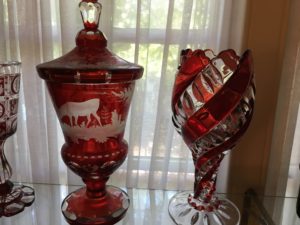 A Covered Goblet: Pokals, or large ceremonial goblets, were produced in great numbers in Bohemia, where glass has been produced since the 14th century. The two examples in the Bellingrath Home are of red cased glass cut to clear with traditional scenes of stags in the woods.  These date between 1850 and 1870 and would have been given as gifts, or used to celebrate a wedding, Christening or other special event. 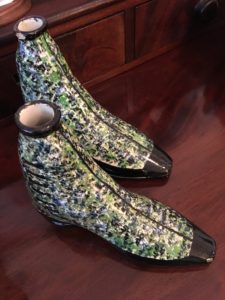 A Pair of Boot Shaped Flasks: While this pair of ceramic boots have been termed shoe warmers in past inventories, the most recent research indicates they held something far more potent than hot water.  These are mid-19th century flasks produced in England to hold gin.  Just why a boot shape was selected is unknown, but perhaps it was chosen to make its true purpose unknown should the local prohibitionist drop by for a visit. 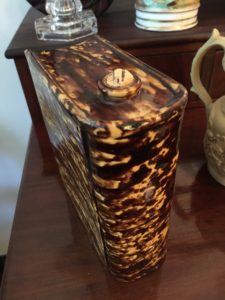 A Bennington Book Flask: Potters in Bennington, Vermont, produced many utilitarian wares during the middle of the 19th century, including liquor flasks shaped like books. Tipplers could slip a “volume” among the books on his shelves where it could be displayed in full view. These ranged in size from 1 pint to a gallon – or from a condensed to an unabridged version. The “books” were often given names on their spines, a favorite being “Departed Spirits.” Unfortunately, the Bellingrath volume is unnamed. 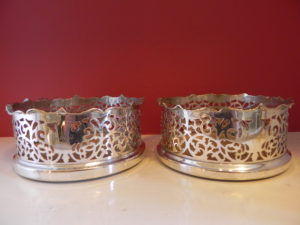 Wine Coasters: A pair of Sheffield wine coasters is engraved with the name Tuthill, recalling the Spring Hill family whose home once faced St. Paul’s Church on Old Shell Road. Coasters or “bottle slides” were created to hold wine bottles or crystal decanters.

Guests could slide, or coast the bottles up and down a table, and their shape kept the fragile containers from striking one another. 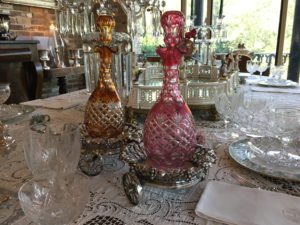 A Wine Trolley: To increase sales of wine coasters, British silver manufacturers took a pair and mounted them on wheels. A handle was added to the front and guests could now pull a pair of decanters up and down the dining table rather than slide them.

Trio of Wine Coolers: Three English silver wine coolers on the Dining Porch were designed to keep wine chilled. Each of these could be filled with ice beneath a removable silver bottle holder. Thus, when the bottles are removed, the contents are cold, but the surface remains relatively dry. Period photos reveal that Mrs. Bellingrath filled these with flowers rather than ice.