Compiled from the  archives at Bellingrath Gardens and Home

John Dickinson was a longtime guide at Bellingrath Gardens and Home during the 1950s and 1960s. The Bellingrath archives contain an interview with General Manager Fred Holder dated July 2, 1957, and a brief story from the Birmingham Post-Herald dated October 18, 1960.

By 1960, Mr. Dickinson was 59 and had been on the job for 21 years. The Post-Herald article described him as “a philosopher, whose bits of wisdom add much to the wonders of the ‘Charm Spot of the Deep South.’ … ‘No man’s opinion is worthless,’ Johnnie says. ‘Even a clock that won’t run is right twice a day.’ ” 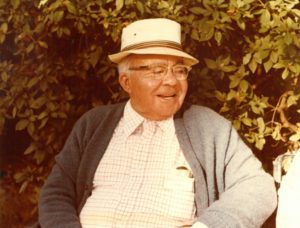 During his tours, Mr. Dickinson regaled visitors with his extensive knowledge of the plants. The article described his style: “… The guide rattles off names, both common and botanical, as fast as a stationmaster calls off train stops. In the gardens he can relate tales of how each plant came to be called by its common name (and) can tell the botanical name of the plant and where it came from.

“Asked which is his favorite flower or plant, Johnnie says he cannot play favorites. ‘It’s just like a mother with several children,’ he says. ‘I boast about the one nearest at hand.’ ”

In the 1957 interview, Fred Holder asked Mr. Dickinson about the nickname he used when he introduced himself, “Johnnie-on-the-Spot in the Charm Spot of the Deep South.”

“Did it occur to you, or did someone else name you that way?” Mr. Holder asked.

“It just occurred to me because ‘most everything they would want, they’d holler out for Johnnie, and I was always on the spot,” Mr. Dickinson replied.

The Post-Herald article also noted that Mr. Dickinson was a deeply religious man.

“Without religion, the flowers just won’t cooperate,” he said.