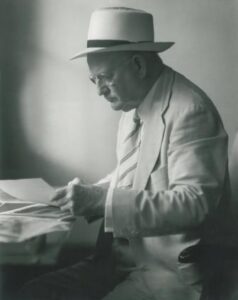 Nearly a century ago, architect George B. Rogers was making a name for himself in Mobile with his eye for designs that were true to the city’s history and style. Now, two local historians are taking a fresh look at Rogers’s life and career.

Rogers arrived in Mobile in 1901. By the time of his death in 1945, he had designed a variety of structures, including office buildings, churches, club houses and mansions, many of which are still standing. His architectural styles ranged from Italian Renaissance to Colonial Revival.

One of Rogers’ most famous achievements is Bellingrath Gardens and Home, the state’s oldest public garden. Walter and Bessie Bellingrath first hired the architect in 1927 to create the plan for the Gardens, then re-hired him in 1934 to design their new home on the banks of the Fowl River.

For the past two years, historians Tom McGehee and Cart Blackwell have been collaborating on a book about the architect who left an indelible impact on the streetscapes of his adopted home. McGehee is the Museum Home Director at Bellingrath; Blackwell is the curator of the Mobile Carnival Museum.

Blackwell, a Selma native, originally came to Mobile as an architectural historian and had developed a great interest in Rogers’ career. McGehee has been researching local architectural history for more than 30 years, with an added emphasis on Rogers’ work since joining Bellingrath Gardens and Home 26 years ago.

Their book about Rogers, which will be published later this year, will include Blackwell’s research about how the architect’s designs fit in a larger national trajectory and McGehee’s examination of Rogers’ personal relationships with his clients, a list that included many of Mobile’s most prominent citizens.

Rogers was known more for his architectural designs and his landscape designs, but he was also a talented interior designer, McGehee noted. For example, the 1935 Bellingrath Home features a Colonial Revival staircase, elaborate plasterwork and Adams-style mantelpieces in each of the major rooms – architectural features that were commonly found in Mobile’s historic mansions.

“Rogers once said that the best architects borrow from the past, and this is exactly what he did,” McGehee said. “He believed that by making a building relate to that past, the first-time viewer of his work would find something comfortable and appealing.”

During his research, McGehee has discovered that the collaboration between Rogers and the Bellingraths wasn’t always smooth. Rogers was perpetually over budget and behind schedule, McGehee said. At one point, Mr. Bellingrath commented, “Patience, which my wife and I have long seen as a virtue, is coming to an end.”

Rogers’ designs in Mobile include the 1907 Van Antwerp Building at Royal and Dauphin, which was the city’s first true skyscraper; Government Street Methodist Church at Government and Broad streets, completed in 1917; the Scottish Rite Temple, built in 1921 at St. Francis and Claiborne streets; Murphy High School in Midtown, built in 1926; the World War I Monument, dedicated in 1926; and the downtown branch of the Mobile Public Library on Government Street, built in 1928.